Alan Frazier, 51, has been named by The Reno Gazette as the man who went on a shooting rampage at the Center for Advanced Medicine in Reno, Nevada on December 17. Investigators have said that Frazier attacked three people, killing one doctor before taking his own life on December 17. In total, he fired four shots from his 12-gauge shotgun. 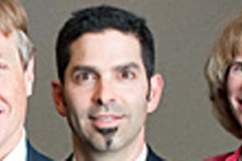 1. Frazier Was Tracked Down From His License Plate

Frazier was identified by The Reno Gazette when the reporters traced the license plate of a silver GMC pickup truck that was towed away from the scene of the shooting. The tracked down Frazier’s home located at 3570 Evergreen Circle in Lake Almanor, California (above).

After speaking to some of Frazier’s neighbors, they said that detectives had been to their home asking about the man and that they had been told he was the shooter. His home is about 120 miles away from where the shooting took place.

He had had medical problems stemming from a botched surgery. The neighbor who spoke to the media didn’t know where exactly Frazier had the surgery. One neighbor suspected that Frazier was in “pain.” The shooting occurred in the hospital’s urology department, reports KCRA.

3. Frazier Left One Neighbor With a Ominous Message

The last time one neighbor, Mike Hawthorne, spoke to Frazier, the shooter told him simply that he “wasn’t coming back.”

4. He Was an Outdoors Man

Frazier was a hunter and fisherman. Residents of his neighborhood would often see him hitting golf balls long distances for his dog to chase. When the snow came in winter, Frazier would plow his neighbor’s driveways in his bobcat, reports The Reno Gazette. His name appears on a local fire department list of people who perform clean-up in the area of Lake Almanor, California.

5. Police Were Called to a Disturbance at his Home Previously

Police have said that they have been called to Frazier’s home twice over the last ten years. The first time was due to a disturbance and the second when Frazier was a victim of vandalism. Sheriff Greg Hagwood said, “He is not widely known by members of the sheriff’s department.” The sheriff went on to tell The Los Angeles Times that officers are in the process of identifying next of kin.

Investigators still do not have a motive for the shooting, reports CBS Sacramento.

Loading more stories
wpDiscuz
0
0
Would love your thoughts, please comment.x
()
x
| Reply
Alan Frazier has been identified as shooter at the Center for Advanced Medicine in Reno on December 17. Frazier killed a doctor and wounded two others before taking his own life.