A California Little League coach is bringing a $500,000 lawsuit against one of his 14-year-old players for accidentally hitting him with a helmet during a celebration, according KCRA 3 in Sacramento.

Alan Beck, the coach, claims the boy “carelessly threw a helmet, striking Plaintiff’s Achilles tendon and tearing it.” Beck is seeking $500,000 for pain and suffering and another $100,000-plus for lost wages and medical bills.

The 14-year-old defendant’s father, Joe Paris, said his son was running toward home plate to score the winning run during a Little League game in Lakeside, California, when he tossed his helmet in celebration — a routine occurrence in all levels of baseball.

Paris said at first he thought the lawsuit was a joke. Now he just thinks it’s ridiculous.

Watch the story below: 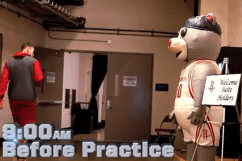