Dee Dee Bonner is the mother of Alabama quarterback A.J. McCarron. She has become an Internet obsession for many in the year since the Crimson Tide’s championship run in 2012.

Here’s what you need to know about Ms. Bonner:

1. She First Rose to Prominence During 2013 BCS Championship Game

Watch Brent Musburger notoriously fawn over Bonner and Webb during the live broadcast of the 2013 BCS Championship game.

2. She Quickly Became an Internet Sensation

Once the world was introduced to Bonner, it couldn’t get enough. Photos, including the above snapshot of her in a revealing red dress, flooded the Internet.

3. She Shares a Close Relationship With Katherine Webb

In a November 2013 interview with FOX Sports, Bonner revealed that she and Katherine Webb share a very close relationship.

Katherine, or Kat as I call her, is the sweetest, most precious and beautiful person, she said. I love her to death. She and AJ are doing great, and I consider her and I very close. I love her with all my heart and can’€™t wait to share many more years with her.”

Bonner, who has garnered more than 23,000 followers on Twitter, is not shy about sharing her thoughts through social media. She has been involved in a number of Twitter feuds with fans in the past, but told FOX Sports that she is working hard to resist the temptation of engaging in digital warfare.

I have gotten so much better at this (refraining from Twitter feuds) believe it or not! Ha ha. It is very hard to read a comment that can be very crude and hurtful, especially when they seem to attack your child and do not know him at all. I can understand and even appreciate constructive criticism. After all, that is how we learn to be better —€“ even if it’€™s hard to hear. However, the attacks made by some people you know that they’ve have never played D1 football, possibly never played a sport in their life, can be hard at times to take. So I have been known to tell a few people to stick to playing Xbox.”

5. She Came Under Fire After Controversial Tweet About Jameis Winston

Bonner did have a social media slip-up following Florida State’s 34-31 victory over Auburn in the 2014 BCS National Championship game. She ridiculed Seminoles quarterback Jameis Winston for being incomprehensible during his postgame interview, posting “Am I listening to English?” on her Twitter page.

This tweet got deleted fast by Aj McCarron's mommy. pic.twitter.com/GjygWLs3ue

Any1 that knows our family knows we r far from racist. My tweet was not in anyway meant that way. I sincerely apologize if it offended any1 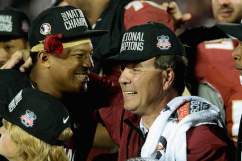