Startling reports emerged today from various English and Russian news sources that a Russian ghost ship may be headed toward the coast of England. The abandoned cruise liner is also said to be filed with cannibal rats that have been starved for almost a full year.

Here is what you need to know about this bobbing unmanned terror:

The Lyubov Orlova was built in Yugoslavia in 1976, according to UK’s Independent, and was intended to be a luxury cruise liner.

The ship was a 237-passenger vessel and measured about 100 meters in length. The shop took numerous trips to the Arctic as part of the company Cruise North Expeditions.

Above you can see a video of the ship while it was still operational.

2. It Was Abandoned in Canada After Bankruptcy

In 2010 after Cruise North’s impending bankruptcy, the ship remained in St. John’s Harbor in Canada for almost two years.

Canada eventually made plans to remove the giant eyesore, which reportedly had become infested with rats.

The ship was sold for $275,000 to an Iranian scrap merchant, Hussein Humayuni, and was to be towed to a scrap yard in the Dominican Republic.

On January 23, 2013, the ship set out on its journey to the Dominican Republic. But, one week into the slow-moving tow, the cord snapped. Rather than attempt to reclaim the ship, Canada watched anxiously as the cruise liner drifted closer to its oil installations, and then less anxiously as it drifted out into the Atlantic.

Then the boat went “missing,” or nobody really bothered to find it. Later, in March of 2013, distress signals came from the ship’s lifeboats, which had somehow fallen into the water. They were discovered two-thirds of the way across the Atlantic.

By October 2013, the Irish Coast Guard was beginning to express anger and frustration with the Canadian government as the “derelict, rat-infested biohazard” floated closer to the Irish coast.

In every description of the boat since it was abandoned in 2010, people have described the boat as being severely infested with rats. Now that the ship has been out at sea for almost a year, however, news outlets are focusing on another aspect of the rats: their cannibalism.

With a lack of food and a growing rat population, many believe the rats must have turned to cannibalism as they drifted across the Atlantic ocean. 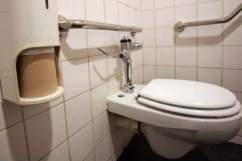