Katrina Torres is the woman who ran onto the field in a bikini during Sunday’s Pro Bowl. She’s an Albuquerque, New Mexico, native who now lives in Kahaluu, Hawaii. She moved there about five years ago after getting a scholarship to play soccer at Hawaii Pacific University.

As you can see from her chiseled physique, Katrina is in phenomenal shape. It should come as no surprise that she’s a fitness model, and works at a gym.

It’s hard to find a picture of Katrina NOT in a bikini. She is not scared of showing her rock-hard body, and, as we found out during the Pro Bowl, not afraid of the spotlight either.

I really only care about four things in life: Family, God, gains, and veins. The rest is unimportant to me.”

But who is this mystery woman, and what compelled her to go streaking on national television?

We were able to track Katrina down and ask her a few questions. Here’s what we found about her:

1. She Went Streaking For Her Cousin Gary

It’s clear that this streaking incident wasn’t some ill-advised, intoxicated impulse, but rather a coolly calculated, premeditated interruption.

Katrina posted her intentions on Instagram for the world to see shortly before sprinting onto the field late in the fourth quarter. She had the flag of New Mexico draped around her shoulders.

Katrina told us she wanted to go streaking for her cousin Gary, who she says was involved in a motorcycle accident.

Well I did it for my cousin Gary. He lives back home in Albuquerque, New Mexico, and it was always his dream to come with me to the Pro Bowl one year. He got into a motorcycle accident about two years ago which left him unable to walk. Since he can’t walk, I made a promise to him that I would run across the field in honor of him. I just wanted to make him happy knowing that he would be watching back home.”

She also says her family totally supported her decision to dart onto the field.

The awesome thing is that my mom, my auntie and my grandma were all for it! They were ready to bail me out of jail!”

Katrina has a sister, Justina, who is a personal trainer. They live together in Hawaii. After watching Katrina go streaking on national television, she posted how proud she was on her Facebook page. Justina also lives in Kahaluu.

2. She Ran Around for a Good Minute…And Was Completely Sober

Most streakers get taken down very quickly…and most are too drunk to fully realize the consequences of their actions. Katrina, however, says she was completely sober and ran around for a good minute before the show was over.

I ran for about a solid minute. I got to high five some players and I even chest bumped and shoulder bumped a couple. I swung my New Mexico flag in the air and then sprinted from one end zone to about the 20-yard line on the other side. Everyone was cheering me on — even the players.”

Here’s a good video of Katrina streaking from her Instagram page:

3. Deion Sanders Came to Her Rescue

According to Katrina, Hall of Fame cornerback Deion Sanders — who coached Team Sanders in Sunday’s Pro Bowl — followed the police after the incident and even offered to bail her out of jail if she had been arrested.

Deion Sanders followed the cops, and as they took me out he told them that I was funny and a cool girl. He said I did nothing wrong and that if they put me in jail he would bail me out.”

4. She Lives an Incredibly Active Lifestyle

Naturally, we asked Katrina how she got to be in such incredible shape. Not surprisingly, she draws her inspiration from others.

Everyday that I workout or run I do it for Gary and for people like him that would give anything to be able to walk, much less run or workout. People always ask me at the gym what I’m training for because I work out so intensely and the answer I always give is…I do it for those people that can’t. I train my ass off because I’m blessed with my health to do it! I do it because so many people wish they could do it. I do it for Gary and people like him.”

Katrina also told us that she and Justina paddle for their local outrigger canoe club.

Her and I both paddle for our outrigger canoe club here in Kahalu’u, Hawaii. She’s a stroker and is in the front of the canoe and I’m a steersman in the back of the canoe.”

Katrina didn’t come off as an attention-seeker who just wanted to thrust the spotlight on herself. She is a very family-oriented person, and just wanted to talk about the joy she brought to her cousin Gary.

I think the main thing that I want to get across is that I did it for my cousin. Most people take their health for granted and my cousin who can’t even walk would’ve done anything to be able to do what I did. Running across the field like that was for him and for people like him who can’t walk or who are sick.”

Family is everything to us. We have a small family and we all take care of each other. There isn’t anything that we wouldn’t do for family. Even if it means streaking during the Pro Bowl to make my cousin happy.”

Ironically, Katrina’s little cousin Kenidie turns six years old on Super Bowl Sunday. But, unfortunately for all her new fans, she says will NOT be going streaking during the game.

That would just be sacrilegious,” she said. 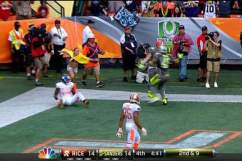 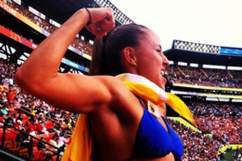 Loading more stories
wpDiscuz
0
0
Would love your thoughts, please comment.x
()
x
| Reply
We spoke with Katrina Torres, the bikini-clad woman who went streaking during the Pro Bowl. The reason why she did it might surprise you.