Deion Sanders interviewed Marshawn Lynch at Super Bowl Media Day on Tuesday. Lynch wasn’t in too much of a mood to talk.

Not only did the man nicknamed “Beast Mode” curse on national television, reports were that he left Media Day after just six minutes.

What really happened, though, is that Lynch — concealed by a hoodie and sunglasses — found a quiet place to hide away from the media frenzy, NBC Sports reported.

But from all reports, this is nothing more than Marshawn being Marshawn.

“He’s talking – all the time. Marshawn doesn’t dislike the media, he just doesn’t like doing this stuff, so it’s nothing personal with media – he just doesn’t enjoy it.” 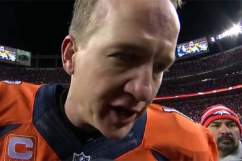 WATCH: ‘A Bad Lip Reading of the NFL’