CCTV video has emerged of a Bridgeport, Connecticut, principal dragging two kindergartners through the hallways by the feet and hands. The two incidents occurred in spring of 2012 and were investigated by the Board of Education in October 2013, according to NBC Connecticut.

The parents of the two children agreed this week to release the raw footage of the incident in light of Dickson’s impending return to the school district, but not to Tisdale School. 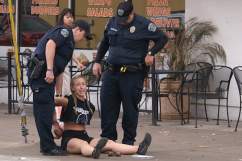