A sinkhole has opened under the National Corvette Museum: http://t.co/scH0HFVbUl pic.twitter.com/9R9S86AGte

A massive sinkhole that opened beneath the National Corvette Museum in Bowling Green, Kentucky, has swallowed eight pristine models of the iconic American sports car.

The hole, some 40 feet wide and up to 30 feet deep, formed beneath the museum’s Skydome area and was discovered early this morning.

Just got more pictures of the #sinkhole at the #Corvette museum in #Kentucky. pic.twitter.com/DnaaHm44l7

A sinkhole has developed at the Corvette Museum in Bowling Green. 8 cars so far in it pic.twitter.com/3NpFNii13f

According to the museum’s blog, these were the specific models reclaimed by the Earth: 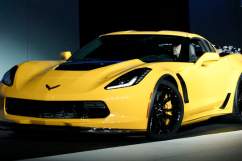 Detroit Auto Show 2014: The Photos You Need to See