Danny Davis is snowboarder competing for the U.S. in the 2014 Winter Olympics.

Here’s what you need to know about this free spirit snowboarder as he shreds some serious snow in Sochi.

1. He’s Threatened to Dethrone Shaun White on the Halfpipe

Davis is perhaps the biggest rival to fellow American Shaun White on the halfpipe. Both men qualified for the Tuesday’s halfpipe final.

UPDATE: Neither Davis nor White medaled in the Olympic halfpipe. White finished fourth, failing to become the first American to three-peat in a Winter Olympics event.

Meanwhile, Davis finished 10th and had the following to say about White after the event, per Yahoo! Sports’ Jeff Passan.

Check out the full results of the men’s halfpipe finals here.

Davis was one of several Olympians to criticize Sochi’s halfpipe course, saying the following, per Bleacher Report.

It’s the Olympics. It should be flawless. What a lame showcase of snowboarding, and what a lame way to treat the athletes.”

“I just hope they can fix this one. Hopefully they can pull it together for a contest. The fact is, everyone will be shredding the same pipe. We all have the same thing to ride. We just want it to be good.”

3. He’s Coming Off Winning a Gold Medal at the X Games

Danny Davis wins SuperPipe – Winter X GamesDanny Davis scores a 95.00 on his second run in the Men's Snowboard SuperPipe final at X Games Aspen 2014 and wins his first X Games gold. SUBSCRIBE ► http://xgam.es/YouTube X Games has been spreading the shred in action sports since 1995. For more coverage and highlights visit the official home at http://xgames.com ——— Twitter…2014-01-27T03:41:54.000Z

Davis is looking to make it back-to-back medals at the X Games and the Olympics. Davis took the gold in his first-ever halfpipe snowboarding final at X Games Aspen — a mere two weeks before the Winter Games in Sochi.

4. Davis is a Member of the ‘Frends Crew’

Despite earning worldwide fame for his talents, the 25-year-old still remains true to the crew’s core principles of snowboarding for fun — not rankings and competition.

The group purposefully leaves the “I” out of friends because it renounces individual acclaim.

Meet the crew in the video above, presented by Alli Sports.

You can also read more about Davis and co. here.

5. He Missed the 2010 Olympics After Suffering a Back Injury

Davis was forced to sit out the 2010 Winter Olympics in Vancouver after crashing an ATV and suffering a serious back injury, according to his US Snowboarding profile page.

Davis was in the top qualifying spot for the Olympics at the time. 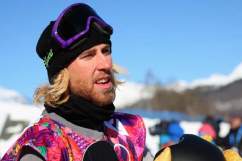