On Sunday, USA Today reported that at least 25 children in California have suffered from a mysterious, polio-like virus that causes paralysis of limbs. Here’s what you need to know:

Sofia Jarvis was 2-years-old in 2012, when she began to experience wheezing and difficulty breathing. She spent days in an intensive care unit at Children’s Hospital of Oakland, where she was diagnosed with asthma. But on a follow-up visit, Sofia’s mother Jessica Tomei, 37, realized her daughter’s problem extended beyond the realm of the respiratory. She told USA Today, “As we were leaving the doctor’s office, I noticed that she went to grab something with her left arm and she stopped, midway.”

Sofia was then brought to the clinic of pediatric neurologist Keith Van Harran, where she presented a “unique set of symptoms.” After being treated with steroids and intravenous immunoglobulin therapy, which helps to bolster the body’s anti-bodies to fight viral infection, Sofia’s condition failed to improve.

Today, Sofia’s left arm is paralyzed, she experiences weakness in her left leg, and has “slight breathing issues.”

Still, her family is relieved, her mother told a news conference Monday: “I’d like to say that Sofia is still a healthy young girl who’s thriving. She goes to pre-school. She does dance. We were very lucky that it only affected her left arm. But it’s taken us a long time to get to that point to be OK with that.”

The Jarvis case inspired Van Harren and other neurologists to search recent medical files for similar instances of paralyzing infections, to determine whether a new disease might be emerging. In the two years since Sofia’s diagnosis, the neurologists have identified 25 cases, all in California, as far north as the Bay Area, as far south as San Diego. The median age of the suffers is 12.

2.Some of The Infections Have Been Linked to Enteroviruses

None of the affected children have tested positive for polio itself, all having been vaccinated against the disease in their early childhoods. However, according to NBC News two of the children are believed to have contracted human enterovirus-68, which is associated with polio-like symptoms. According to NBC: “HEV-68 is a rare form of very common enteroviruses, which cause between 10 million and 15 million infections in the U.S. every year, according to the Centers for Disease Control and Prevention.”

Enteroviruses have been responsible for similar outbreaks of paralyzing infections around the world, including Australia and Asia.

3. No Cases Have Been Reported Outside of California

However, Van Haren believes this is primarily because neurologists in other states haven’t been looking. He told USA Today: “My goal is to get the word out to other neurologists, to make them aware of this.”

4. The Cases Do Not Appear to Be Connected

“Thus far, the department has not identified any common causes to suggest that the cases are linked. The investigation is ongoing.”

Van Haren explained to NBC that identifying a common cause would be difficult:

““The tricky thing for this is the window of opportunity for detecting the virus is very limited. We’re talking about doing a sort of epidemiological math where the scientists have to factor in how specific this is.”

The best results can be found through spinal fluid samples, but those are only detectable for a couple of days after infection. The virus can be detected for longer periods of time in the throat, nose or stool, both tests of such samples produce a high rate of false positives.

The viruses associated with the paralysis cases in California are rare. And like with polio itself, the vast majority of those infected with enteroviruses will experience no symptoms. Only in a small fraction of cases will serious illness result.

In an article titled “How worried should we be about a new ‘polio-like’ virus?” Dr. Al Demaria, the state epidemiologist of Massachusetts tells Boston.com: “With polio, 1 in every 1,000 children who were infected developed paralysis,” DeMaria said, “and at its height, polio caused 20,000 to 30,000 cases of paralysis per year,” and while no one knows how common paralysis is from rare enterovirus-68 infections, he estimated the figure would be somewhere between every 1 in 10,000 or and 1 and 100,000 infections.

Dr. Demaria advised that the best way to protect the children in your community from a paralyzing, respiratory virus is to make sure they frequently wash their hands, and keep them from going to school when sick. 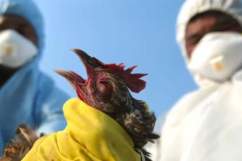 Loading more stories
wpDiscuz
0
0
Would love your thoughts, please comment.x
()
x
| Reply
In California, 25 children have become suddenly paralyzed due to a mysterious, polio-like infection. Here's what you need to know.