Meryl Davis and Charlie White won Olympic gold in ice dancing today in Sochi. After 17 years of working together, they finally have a gold medal to add to their collection. Here’s what you need to know about the winning duo.

Sports Illustrated described their finals moments on the ice today like this:

As the music swelled over the final minute of the program, their feet were in nonstop motion yet every movement was intricately choreographed. Their lifts were a blur as White spun across the ice with Davis held aloft, their movements and expressions still fierce despite the draining demands of the performance.

The key to their success could be that they don’t argue. Davis’ mother, Cheryl, told ESPN,

They discuss things. If they feel too upset to talk without arguing, they’ll give each other the space they need and come back to the table. I think they both must have been therapists in another life. 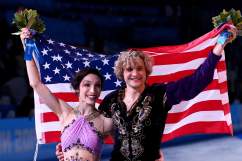 2. Davis & White Are Not Dating

Literally wearing my Valentines heart(s) on my sleeve to go on w/Al near the top of the hour!@NBCOlympics pic.twitter.com/N74u91i7vj

Although there’s speculation the two are a couple, White is dating Tanith Belbin, former figure skater and model, according to Bustle.com.

White told Yahoo Sports about the importance of keeping his relationship under wraps.

It actually still is. So probably … we don’t really talk about it. As an ice dancer, we take our on-ice relationships so seriously, and that’s really the way we like to go about it. [Davis and I] are just presenting ourselves as a team, and all the rest of that [with Belbin] can wait for later.

According to People, at the Vancouver Olympics, the two had to hide their feelings being that they were on rival teams. White was with Davis, and Belbin was dancing with Ben Agosto. 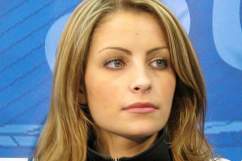 3. They Both Attend the University of Michigan & Haven’t Graduated Yet

CONGRATULATIONS to two of our Wolverines, @Meryl_Davis and @CharlieaWhite for winning the GOLD in #Sochi! Go Red, White, and BLUE!

Davis is 27 and White is 26, but they haven’t completed their undergraduate degrees due to their training schedules.

White told People about balancing school and the Olympics.

But they definitely want degrees – it’s just not happening this year. We’re taking this year off, just because of the time we needed for Olympic season. We’ve always loved being able to skate and go to school but there are so many things that we really have to be able to take care of off the ice.

Davis added her thoughts on the academic aspect of their lives.
“We made the mistake of predicting our date of graduation years ago, and that date has come and gone. So we’re going to stop guessing,” she said.

4. Davis & White Grew Up Together in Michigan

The pair have been skating together since 1997, when they were both ten years old, reports Yahoo Sports. But they’ve known each since they were six and are from neighboring towns in Michigan.

According to ESPN, they were paired up in grade school. White wanted to play hockey, while Davis suffered from dyslexia.

I couldn’t process the notes fast enough to keep up with the pace of the song. Translating that to the ice, I found it much easier to let my body flow with the tempo of the music than I did reading music. I really learned to enjoy, worry-free, in terms of moving with the music. It’s been a really beautiful part of my life.

5. Derek Hough From ‘Dancing With the Stars’ Helped With Their Choreography

The two-time World and five-time National champions chose Emmy winner Derek Hough to help them. Hough worked on their quickstep and foxtrot in their My Fair Lady-themed dance.

Hough told TV Guide that it was an honor being considered for the role.

I was definitely not expecting that call. I still can’t believe they asked me. I got lucky. I really did. It was an honor to help them out any way I could.

The feeling is mutual, and White gushed to People about his new dancing trainer.

What was so special abut working with Derek was how he was able to express to us what we needed to do, but also visualize and recognize the way we’d use his moves on the ice, as well. He was really quite genius.

The award winning choreographer also told TV Guide that he planned on cheering them on at home during the Olympics.

I’m just really excited to see them at the Olympics. I’m not going, but I’ll definitely be watching it at home and freaking out. I’ll be losing my mind. They’re so great and inspiring.

Loading more stories
wpDiscuz
0
0
Would love your thoughts, please comment.x
()
x
| Reply
Meryl Davis and Charlie White just won Olympic gold in ice dancing. Here's what you need to know about the dynamic duo — on and off the ice.