Part of Oklahoma State University was evacuated following reports of a possible threat that made via phone call at 8:45 a.m., reports Fox 23.

1. The Evacuation Was ‘Precautionary’

9:55 a.m. February 13, 2014- The OSU Multimodal is being evacuated as a precautionary measure. During this time the public is being asked to stay away from both the Multimodal and Monroe street parking garage.

Police and fire are on the scene and investigating a possible threat at the facilities at Hall of Fame and Monroe.

2. A Bomb Threat Came From a Woman

As already said, reported bomb threat on #okstate campus. I heard from people there, police arrested someone about twenty minutes ago.

According to campus safety officer Mike Robinson, the call came in from a woman to a campus phone, not the police. She specified the building when giving the treat, Robinson said the call came from a local phone number.

3. No Explosives Were Found

4. The Public Were Told to Stay Away

The public were asked to stay away from the Multimodal and Monroe Street parking garages. The Multimodal garage is the terminal for the campus park-and-ride system. 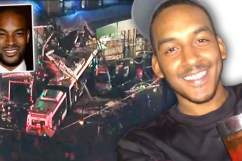