The Mayor of New York Bill De Blasio wowed the crowds at Citi Field with ceremonial first pitch. The Mets are taking on the Washington Nationals in their MLB opener in Queens. The mayor was roundly booed by the crowd as he took the mound, like most mayors are.

According to the Associated Press, the newly elected mayor was joined by six children who were affected by the fatal explosion in Harlem in March that leveled two buildings.

De Blasio prepared for his big day by practicing his pitching techniques at his local YMCA in Park Slope, Brooklyn: 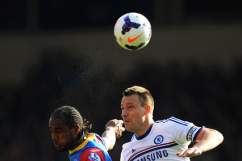