Michael Vick has signed a one-year $5 million deal with the New York Jets. He will replace Mark Sanchez, who was cut by the Jets earlier on March 21.

1. It was first reported by NJ.com that Vick was meeting with the Jets about joining the team to challenge Geno Smith.

2. Jets coach Rex Ryan has made it clear that Geno Smith is his preferred choice at QB.

4. The Jets will be Vick’s third team in the NFL.

I’d like to thank Mark for everything he’s done for this team and me personally. We were rookies together and had some early success, becoming the first rookie head coach and quarterback to go to back-to-back championship games. We experienced a lot together and I really appreciate Mark. He’s a great player, a great teammate, and I wish him nothing but the best. 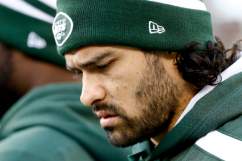