What a start to the NCAA Tournament. According to ESPN, 80% of people who filled out their brackets had Ohio State (ranked No.6) down to beat Dayton in the tournament opener. But nobody told that to senior point guard Vee Sanford who won the game with a lay-up to give Dayton a 60-59 victory.

Here’s what you need to know about Dayton’s hero:

Sanford is dating team cheerleader Evan Eiland, according to her Facebook page. She writes on her social media page that she’s been dating Sanford since September 2011.

He transferred to the University of Dayton during the 2012-13 from Georgetown. Sanford immediately became back up point guard to Khari Price. When Price got injured, Sanford took his chance and never looked back.

He’s a native of Lexington, Kentucky where he attended Lexington Catholic High.

He’s a history major at Dayton. His parents are Vincent and Angela Sanford. The PG also as one younger sister, Nataliah, 18. His father played three seasons as a star at the University of Florida.

About this homework. Not too thrilled abiut attempting it.

Sanford said on Twitter that the only two TV shows he watches as The Walking Dead and House Hunters.

5. He Hit 10 Points Against Ohio State

This season Sanford has played 33 games for Dayton, averaging 9.9 points. He got ten points against Ohio State. 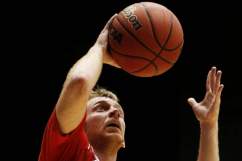