Bob Hoffman is the Mercer basketball coach who masterminded his team’s shocking upset of the four seed Duke. He’s been with the Bears since 2008 and is enjoying his best ever season this year. After the win, Hoffman told CBS reporter Rachel Nichols:

You’re never too old to celebrate. Unbelievable what theses dudes believe about each other and they can accomplish. That’s the kind of heart it takes, and it’s amazing what they’ve done the last three years, believing at the highest level that they can accomplish what they did today.

Prior to taking over at the Bears, Hoffman was the head coach at both Oklahoma Baptist University and the University of Texas-Pan American. 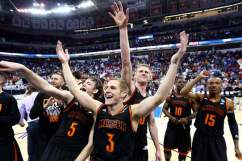 2. Hoffman Made it to the D-League

His total record in his coaching career is 489-239. Hoffman’s been a coach in the NBC D-League, with Rio Grande Valley Vipers. It was there that Hoffman implemented his “Run-and-Gun” style:

Everywhere I have been, we have tried to play at a very fast pace. I know that is how the players enjoy playing the game. Most fans enjoy this style also. I have been blessed to have some great players that really enjoy playing that style of play. It usually gives you an advantage against your opponents when you make a commitment to play fast. They have a hard time simulating what you are trying to accomplish in practice, which gives you an advantage when you get into the games.

3. Hoffman is a Devout Christian

As a devout Christian, Hoffman is an active member of the Fellowship of Christian Athletes.

4. He Won a National Championship in Women’s Basketball

During his career, Hoffman was also an accomplished women’s basketball coach. He won the 1989 women’s NAIA National Championship with Southern Nazararene, he says of the achievement:

Winning the 1989 Women’s NAIA National Championship at Southern Nazarene was an amazing accomplishment. Those ladies were representing a program that had experienced minimal success, but they believed in and relied on each other and accomplished something fantastic. 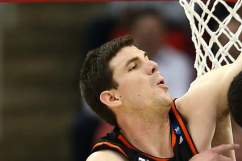