Former Presidents George W. Bush and Bill Clinton got a huge reception from the crowd at the AT&T Stadium during the NCAA Championship Game. The two former commanders are there as a guest of Texas power player Jerry Jones. Bush is of course the former owner of the Texas Rangers, who play basically across the street from the AT&T stadium. 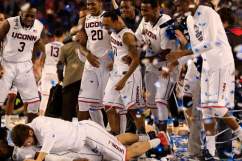