Kevin Ollie points to the crowd as he prepares to cut down the net following UConn’s championship game win over Kentucky. (Getty)

UConn coach Kevin Ollie had never been a head coach at any level prior to taking over for Jim Calhoun in 2012. But after two seasons, he’s already at the top of the profession after his Huskies beat Kentucky in 2013 to win the national championship.

Here’s what you need to know about the hottest name in college basketball:

Ollie in 2006 with teammates Allen Iverson and Samuel Dalembert while playing for the Philadelphia 76ers. (Getty)

Ollie’s pro playing career was about as low-profile as it gets. But he was savvy, hard-working and fundamentally sound enough to earn contracts with 13 teams, starting with the Dallas Mavericks in 1997 and wrapping up with the Oklahoma City Thunder in 2010.

He wasn’t even taken in the 1995 NBA Draft and played two seasons in the now-defunct Continental Basketball Association before finally getting his first NBA contract. But once he caught on, his locker room presence and leadership ability made him an ideal player to mentor stars such as Allen Iverson, LeBron James and Kevin Durant.

His longevity was amazing for a guy who didn’t exactly light up the scoreboard.

What started as a string of 10-day contracts developed into a career in which Ollie was a key member of several playoff teams and in which Ollie made more than $20 million in total salary.

Ollie played for four seasons under Hall of Fame coach Jim Calhoun, leading the Huskies to the Elite Eight in his senior season in 1995 as the team’s starting point guard. He played alongside future NBA players Ray Allen, Donyell Marshall and Travis Knight as UConn rose to national prominence.

He was known as a pass-first point guard, but he wasn’t without his scoring moments, which included the play featured in the video above: a coast-to-coast, game-winning layup at Providence during the 1994-95 season.

During Ollie’s junior year, the Huskies lost in the Sweet 16 to Florida — a painful loss that Ollie avenged last weekend when UConn upset the top-seeded Gators to advance to the title game.

Ollie averaged 6.7 points and 5 assists per game over the course of his career.

With Jim Calhoun looking on, Ollie was introduced as UConn’s head coach on Sept. 13, 2012. (Getty)

Ollie’s meteoric rise in the face of a seemingly impossible task is likely to get him a major hike in pay. And given Ollie’s potential suitors, a new contract might be necessary for UConn to keep him.

Ollie has excelled in college, but he’s also extremely well respected in the NBA — so much so that USA Today’s Chris Strauss suggests that the Lakers or another NBA team could (or at least should) have interest in Ollie as its next head coach.

To understand how Ollie got here, it’s important to understand the circumstances he inherited.

When UConn promoted Ollie in September, 2012 to replace Calhoun, the university had been banned from all postseason play, including the NCAA Tournament, because of sub-standard academic performance.

Several players transferred because of the ban, and expectations were relatively low as a result. But UConn, led by Shabazz Napier and Ryan Boatright, went 20-10, including a season-opening win over powerhouse Michigan State.

When Ollie took over as head coach, he signed a one-year deal. But UConn athletic director Warde Manuel liked what he saw early in the season so much that he signed Ollie to a five-year, $7 million contract extension.

Manuel explained the decision at a news conference:

I needed to see Kevin as a head coach. Kevin can coach, he can put players in the best position to succeed on the court. And I saw how he led off the court, how he led the young men in the student part of student athlete. How he encouraged them and talked to them about the importance of academics.

At the time, the extension seemed fairly generous given that Ollie had coached less than half a season. But it now looks like UConn got an extreme bargain.

Ollie was born in Dallas and spent time in the area visiting his father while growing up, making the Final Four at AT&T Stadium somewhat of a homecoming.

But he spent his childhood in south-central Los Angeles, where basketball helped keep him out of trouble in an area plagued by gang violence.

Ollie talks about his childhood at the 4:40 mark of the video above of a speech he gave to a youth group organized by former UConn star Ben Gordon.

Here’s how Ollie described his childhood in an October profile in Connecticut Magazine:

I walked out my door and I’d be confronted by colors—one block would be the blue gang, one block the red gang. When I walked through the neighborhood, they’d say ‘he plays basketball.

Ollie’s mother, Dorothy, was an assistant minister at a Baptist church, and religion was a major part of his upbringing. Ollie told Connecticut Magazine’s Terese Karmel:

Everyone peaks off of their faith in God and Jesus Christ. Money, women, alcohol can’t fill a void. Religion can help you overcome obstacles.

Ollie’s LA roots provide one reason for people to think he’d be a good fit on the Lakers sideline.

5. Ollie’s Son, Jalen, Was a Star Quarterback on His High School Team

As Ollie was preparing for the 2013-14 season, he had another role to juggle along with basketball coach: Football dad.

Ollie was constantly spotted in the stands at Glastonbury High School, whose senior quarterback is Jalen Ollie, Kevin’s son. Jalen, who also played basketball for the Tomahawks, threw for nearly 3,000 yards last season and led Glastonbury to the Connecticut Class LL state quarterfinals.

(Watch Ollie throw a 71-yard touchdown pass in the video above from GameTimeCT.com.)

He’s using his legs, using his arm. To be a dual threat, that’s good. He’s not Michael Vick or anything like that, but he can get out and escape. And he does have an arm, too, when he needs it.

Ollie’s wife, Stephanie, is a nurse in the cardiac arrest unit at St. Francis Hospital in Hartford. The couple also has a daughter named Cheyenne. 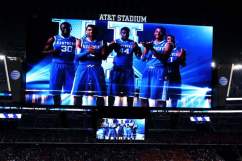