Children re-enact the battle at North Bridge in Concord, Massachusetts, part of the Battles of Lexington and Concord. (Getty)

Monday is Patriots Day, which, in addition to serving as the backdrop for the Boston Marathon and a ridiculously early Red Sox home game, commemorates one of the most important events in American history.

1. It’s an Official Holiday in 3 States

Two Massachusetts traditions rolled into one: Patriots’ Day and the Red Sox. (Getty)

The holiday is officially recognized in Massachusetts, Maine (which was originally part of Massachusetts) and Wisconsin. There’s also a suggested observance in Florida, but it’s not an official holiday in the Sunshine State.

2. It Commemorates the Battles of Lexington and Concord

The holiday commemorates the first battles of the Revolutionary War, which were preceded by Paul Revere’s famous ride, during which he rode on horseback from Boston, warning colonists that the British were coming.

The battles took place on April 19, 1775 when Massachusetts militiamen exchanged fire with British troops in Lexington and Concord, Massachusetts.

Each year, locals in Eastern Massachusetts commemorate the holiday with ceremonies and re-enactments that begin with an event around dawn on the Lexington Town Green and include a battle re-enactment on the old North Bridge in Concord.

The National Park Service has a full list of this year’s festivities. (Above, watch a video of a re-enactment on the Lexington Green in 2010.)

The holiday originally took place every year on April 19, but since 1969 has taken place on the third Monday of every April.

3. It Always Coincides With the Boston Marathon

The Boston Marathon, the oldest and most prestigious in the world, takes place each year on Patriots’ Day. This year’s marathon, the first since last year’s bombings, is expected to include more than 36,000 runners and more a record number of spectators well in excess of 500,000.

The day is known as Marathon Monday among Bostonians because of the role the marathon plays in the day.

Carlos Arredondo, a first responder at the Boston bombings, and survivors of the bombings were honored at Fenway Park. (Getty)

The Red Sox have been scheduled to play a home game on Patriots’ Day every year since 1959. The game typically starts at 11 a.m., making it the earliest local start time of the year in Major League Baseball. (Games that have taken place in Japan or Australia have had earlier start times in the United States because of the time difference.)

The Sox’s game against the Tampa Bay Rays in 2013 ended (with a Sox victory) minutes before the bombs went off at the Marathon finish line.

This year, the Sox are hosting the Baltimore Orioles in the finale of a four-game series. The teams honored the Marathon bombing victims before Sunday night’s game (pictured above) because the game took place on the one-year anniversary of Boston’s first home game since the bombings.

The Sox game typically ends in time for fans to make the short walk after the game from Fenway Park to the finish line at Copley Square.

Massachusetts initiated the holiday to replace Fast Day, a day of prayer that had been commemorated in some parts of the United States dating back to the 17th century. Maine followed suit quickly, and Patriots’ Day has stuck as the holiday in both states.

Fast Day was still celebrated in various forms in some states until 1991, when it was acknowledged for the last time in New Hampshire. 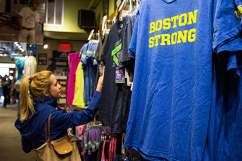 Read More
5 Fast Facts, Boston Marathon, Sports
Everything you need to know about Patriots' Day, which celebrates American history and coincides with the Boston Marathon.