Three years ago, it was Kemba Walker. Now it’s Shabazz Napier. UConn is in the national championship game thanks to the play of a dynamic guard. What you need to know about the Huskies’ latest star.

1. He Was the Most Outstanding Player in the Final Four

Napier scored 22 points Monday night to leaad UConnn to its fourth championship, all in the last 15 years. That came after a 12-point, 6-rebound performance against Florida in the semifinals that might have actually been his worst performance of the NCAA Tournament. He scored at least 19 points in every other tournament game, including a 25-point, 6-rebound showing in UConn’s upset of Michigan State in the East Regional title game at Madison Square Garden.

And that was after a spectacular regular season in which Napier kept the Huskies in the top 25 for most of the year and hit clutch shot after clutch shot.

Napier accounted for one of the most dramatic moments of the season when his buzzer-beater gave UConn a win over Florida Dec. 2 at Gampel Pavilion. After that loss, Florida won 30 straight games and didn’t lose again until Saturday, to UConn in the Final Four.

I wonder whose number will be added? #UConn pic.twitter.com/dGbIfhHppc

2. He Was Named the American Athletic Conference Player of the Year

Napier edged fellow first-team All-American Sean Kilpatrick of Cincinnati in the race for the top honor in the AAC, a new conference created last year when the old Big East split into two conferences.

The debate between Napier and Kilpatrick was intense, with Kilpatrick and Bearcats coach Mick Cronin telling reporters Kilpatrick deserved the award and Napier shooting back.

The New Haven Register has more on the back-and-forth.

3. He was a Freshman on UConn’s 2011 National Championship Team

Napier and Giffey are the only two players in NCAA Tournament history to play in an NCAA title game as both a freshman and a senior. 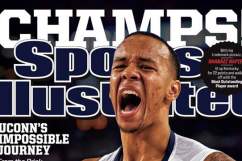 4.Napier is Part of a Long Line of Star UConn Guards

Napier is just the latest in a string of star UConn guards that includes Walker and UConn coach Kevin Ollie, who played at UConn in the 1990s. The school has also produced NBA stars Allen and Hamilton, and former college standouts like Taliek Brown, Chris Smith, Doron Sheffer, A.J. Price and Marcus Williams.

The Hartford Courant recently profiled Napier and the swagger that he shares with Walker and Brown.

Here’s what Walker told The Courant about Napier:

5.He’s a Potential First Round Pick in the NBA Draft

Shabazz Napier 2013 Scouting VideoUConn's Shabazz Napier has proven himself to be one of the top guards in college basketball. What are his strengths and weaknesses as a NBA draft prospect?2014-01-02T13:44:05.000Z

NBADraft.net projects Napier as the 24th pick in this summer’s NBA draft. If that prediction comes to fruition, Napier will be reunited with Walker.

Napier’s draft stock has improved over the last several months. As the New Haven Register reported in February, at the time, Napier was projected as a second round pick, with NBADraft.net projecting him as the 36th overall pick.

But a scout who talked to the Register’s David Borges had the following to say about Napier while predicting Napier would be a first-rounder:

First of all, he’s got the ball on a string, great ball control, great understanding of the game. He’s got tremendous confidence, he’s a knockdown shooter from the perimeter. And he’s got a big heart.

DraftExpress.com, which put together the video featured above, has Napier being taken by the Washington Wizards with the 16th pick in the second round. 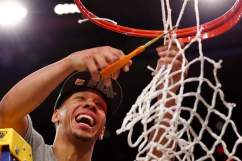