There has been a shooting at a Subway restaurant on West Highland Avenue in San Bernardino, California, reports The Press Enterprise.

1. One Person Was Reported to Have Been Killed

Initial reports indicated that one person was killed in the attack. Those reports appear to have been incorrect. The shooting erupted outside of a laundromat beside the Subway. Witnesses saw two men talking before one man opened fire on the other, reports The Press Enterprise. One person, Renae Jones, said “I heard six gunshots.” She added that she saw a man with two bullet wounds lying flat on his stomach. She added:

His brother was standing over him (on a cellphone) calling their mother, I’m just devastated to see a man laying there with bullet wounds. I just prayed for him.

The gunman fled from the scene through the mall’s parking lot. As he ran he shot four more bullets in the direction of the victim.

2. 3 People Have Been Rushed to Hospital

Three people in total were injured in the attack, reports NBC Los Angeles. The station doesn’t specify how many of the injured were shot. One woman was injured from shattered glass, reports the Press Enterprise.

3. Local Schools Are On Lockdown

The Arrowhead Middle School which is located just around the corner and the San Bernardino High School are both on lockdown.

4. The Suspect is Still at Large

According to NBC Los Angeles, the suspect in the shooting is still at large.

5. The Attack Happened During the Lunchtime Rush 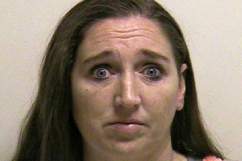