Boko Haram is the extremist terrorist organization operating on the border between Nigeria, Niger, Chad, and Cameroon. According to Reporters Without Borders, the name Boko Haram means “Western education is sin,” and the group, founded in 2002, is hell-bent on bringing Sharia law to Nigeria through violence aimed at Christians and disagreeing Muslims.

The organization has been in the news recently after increased media attention in the United States to attacks and kidnappings.

1. An Attack Killed Hundreds in Nigeria

At least 300 are dead after Boko Haram gunman raided the northern Nigerian town of Gamoru Ngala on the border with Cameroon. According to APF, the gunman destroyed buildings, set fires, and shot at civilians as they attempted to flee. Although Nigerian media are not publishing any figures at this time, a local senator puts the death toll at at least 300 people. According to RT, among the dead are at least 16 policemen.

The town was reportedly unguarded because the military nearby was sent out to look for the over-200 school girls kidnapped last month.

2. They Claimed Responsibility for Kidnapping Hundreds of School Girls

A video that surfaced in early May showing members of Boko Haram and their leader, Imam Abubakar Shekau, claiming responsibility for the abduction of over 200 school girls taken during raid on a boarding school in Chibok on April 14. The video claims that the girls, aged 12 to 15, would be sold as slaves and “married” off. The abduction of the girls has sparked an international outcry and a renewed interest in the terror being caused by Boko Haram in this region of Africa.

Nigerian police announced Wednesday that they are offering a $300,000 reward for information leading to the rescue of the girls.

3. They’re Located Along the Borders of Nigeria, Cameroon, and Niger

Based out of the city of Maiduguri, Boko Haram has been recruiting locals since its 2002 creation. It started with a religious complex which, according to BBC, including a religious school and a mosque which attracted impoverished Muslim families from the region.

Attacks against the Nigerian government, which the group sees as secularist, began in 2009.

4. The Organization is Run By Ruthless Ideologue Abubakar Shekau

According to CNN, Abubakar Shekau is the mysterious leader of Boko Haram. He was born in a remote region of Nigeria and became a self-proclaimed expert in Islam. His nickname is reportedly “Darul Tawheed” which means an expert in monotheism.

The U.S. State Department currently has a $7 million reward for him, though still relatively little is known about him. The State Department has his birthdate listed as either 1965, 1969, and 1975.

5. The United States Has Vowed to Give Assistance to Find the Missing Girls

On Tuesday, President Obama announced that the United States will be sending a team to Nigeria to assist in the location and rescue of the over 200 missing girls. Obama told ABC on Tuesday:

We’ve already sent in a team to Nigeria – they’ve accepted our help through a combination of military, law enforcement, and other agencies who are going in, trying to identify where in fact these girls might be and provide them help. 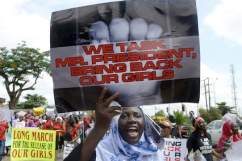 Loading more stories
wpDiscuz
0
0
Would love your thoughts, please comment.x
()
x
| Reply
What is Boko Haram? Here is what you need to know about the African terrorist group attacking and kidnapping in Nigeria.