Curt Schilling and his son, Gehrig, at Fenway Park. (Getty)

The 2004 World Series champion Red Sox had a 10-year reunion Wednesday night at Fenway Park, commemorating the anniversary of one of the most celebrated title runs in history. The mood was bound to be joyous no matter what, but no moment drew more of a reaction from the crowd than the entrance of Curt Schilling, who made his first public appearance since being diagnosed with cancer in February.

Schilling, whose pitching heroics in the famous 2004 “Bloody Sock Game” helped the Sox come back from a 3-0 ALCS deficit against the arch rival Yankees, was not initially expected to be at the reunion. But he emerged from the Green Monster and, accompanied by his son, Gehrig, walked onto the field to a loud, extended ovation.

Updates about Schilling’s progress have been few and far between, but his appearance Wednesday brought him back into the headlines.

Here’s what you need to know about Schilling’s diagnosis and treatment:

1. He Has Not Revealed What Type of Cancer He Has

Schilling gets a hug from David Ortiz as Keith Foulke looks on during Wednesday’s ceremony at Fenway Park. (Getty)

In announcing his diagnosis in February, Schilling — an activist for ALS awareness — revealed he had cancer, but did not disclose what type he had, and did not reveal any details about the prognosis beyond his determination to beat the disease.

Schilling, known during the course of his career for being one of the most outspoken athletes in professional sports on issues ranging to steroid use to presidential politics, had been an active Twitter user prior to the diagnosis. But his account has been mostly quiet over the last several months.

2. He’s Completed Chemotherapy and Radiation & Returned Home From the Hospital

39 days later and he is home!!! pic.twitter.com/m4YLvxVYUk

Schilling’s wife, Shonda, tweeted April 17 that Schilling had returned home 39 days after entering the hospital. Schilling’s daughter, Gabby, had been tweeting updates as her dad’s treatments were winding down.

After Schilling’s homecoming, Shonda tweeted a picture of Curt posing with Gabby in a prom gown, announcing that Curt had succeeded in his goal of feeling well enough to pose for the picture.

beyond blessed to be able to say that my dad finished his LAST chemo today! just 3 more days of radiation #fuckcancer pic.twitter.com/xBePFs4zCL

Time to heal. Mentally and physically. Proud of you!! pic.twitter.com/GjqS4H6BYR

His goal was to feel good enough to take a picture with Gabby before prom. Check pic.twitter.com/Dm7r072Gjw

3. He’s on Leave From His Job as an ESPN Analyst

Schilling had been gearing up for his first full year in the booth as a member of ESPN’s Sunday Night Baseball crew when he received the diagnosis.

Dan Shulman and John Kruk (Schilling’s teammate on the pennant-winning 1993 Phillies) are doing the games without a third man in the booth while Schilling is out.

ESPN put out this statement when Schilling revealed his diagnosis:

Our thoughts are with Curt and his family during this challenging time. His ESPN teammates wish him continued strength in his cancer fight, and we look forward to welcoming him back to our baseball coverage whenever he’s ready.

4. The Schillings Sold Their House After Schilling’s Video Game Company Went Under

The Schillings recently sold a sprawling house in Medfield, Massachusetts that they bought from former New England Patriots quarterback Drew Bledsoe when Schilling signed with the Red Sox. The Boston Globe reported that the house sold for $2.5 million — a decrease of $500,000 from the $3 million the Schillings had been seeking. The Schillings bought the house for $4.5 million in 2004, according to property records posted at Zillow.com.

The sale followed an estate sale in which Schilling sold off memorabilia from his playing days in an effort to curb some of the financial struggles that ensued when 38 Studios, a video game company Schilling founded and invested millions in, went under.

The 38 Studios saga has been the dominant political story over the past year in Rhode Island, where the state House of Representatives is trying to avoid defaulting on a $75 million loan it took out to invest in 38 Studios when the company moved to Rhode Island from Massachusetts.

The House had invited Schilling to testify about his dealings with the state, but Schilling’s lawyer told lawmakers that his client’s cancer treatments would prevent him from attending or even being able to talk about testifying in the future.

According to the Providence Journal, attorney Edward J. Hayes wrote the following in a letter to House Oversight Committee Chairwoman Karen MacBeth:

As you are probably aware, Mr. Schilling was recently diagnosed with cancer and has been undergoing extensive treatments. As a result we are not in a position to make him available to your committee at this time and quite frankly, are not in a position to meaningfully discuss with Mr. Schilling whether such an appearance would be appropriate after his illness is fully treated.

Schilling discussed 38 Studios’ failure in this 2012 interview on WEEI’s Dennis and Callahan show:

5. All Sorts of People Chimed in on Twitter to Wish Schilling Well

Such a bitter sweet night for the schilling family to celebrate 2004 at Fenway tonight pic.twitter.com/smSA6Uendd

Tweets honoring Schilling came pouring in Wednesday night from friends, family, fans and even Secretary of State John Kerry, who Schilling campaigned against in the 2004 presidential election.

Kerry was the junior senator from Massachusetts and a self-proclaimed Red Sox fan during the election. Schilling is a Republican who traveled to Ohio and made national TV appearances to campaign for President Bush.

Several of Schilling’s teammates, including battery mate Jason Varitek, had asked reporters to tweet out good wishes to Schill prior to the ceremony.

Jason Varitek asked that on behalf of him and his teammates, that a shoutout go to Curt Schilling @gehrig38, who was The Man in '04 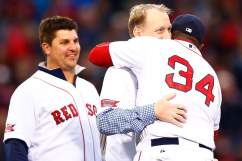 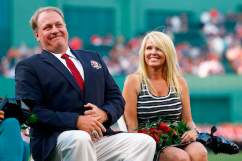 Curt Schilling Photos: The Pictures You Need to See