On Wednesday, May 28, at 10 p.m., Edward Snowden will be interviewed for the first time on American network television. Last week, NBC News announced that Brian Williams had flown to Moscow in order to conduct mainstream American media’s first interview with the NSA contractor-turned-whistleblower Edward Snowden.

Here is what you should expect from the interview:

1. Edward Snowden Will Talk About Asylum & Coming Back to the USA

Rumors of Snowden’s return to the United States flew after news emerged last month that Snowden had retained a lawyer who specializes in the Espionage Act, under which Snowden would be charged. During the interview, Brian Williams says the two discuss the prospect of alyssum and homecoming.

According to the New York Times, Williams sat down with Snowden in Moscow’s Kempinski Hotel and was instantly impressed. Williams called Snowden an “enigmatic guy” and “blindingly smart. Pay no attention to the fact that he only has a G.E.D. from high school.” 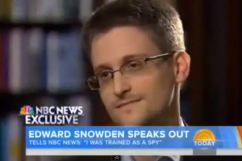 3. Snowden Calls Himself a ‘Spy’

News outlets from all over the web have already commented on the excerpt from the interview, published in an article by NBC News, in which Snowden calls himself a “spy.”

With that comment, Snowden clashes with his critics, including President Obama, who dismissed him as a “hacker.”

He tells Williams, “I was trained as a spy in sort of the traditional sense of the word in that I lived and worked undercover overseas — pretending to work in a job that I’m not — and even being assigned a name that was not mine.”

4. He Says the U.S. Is to Blame for His Time in Russia

In the interview, Snowden says he intended to travel to Latin America, but after he landed in Moscow, his passport was revoked by the U.S. government. Snowden said, “…the United States government decided to revoke my passport and trap me in the Moscow airport. So when people ask ‘Why are you in Russia?’ I say, ‘Please ask the State Department.'”

You can watch that video of Kerry above.

5. The 4-Hour Interview Was Trimmed Down to 1 Hour

Although Brian Williams says he and Snowden spoke for around four hours, NBC has only slated a one-hour block for the program. It is unknown if NBC will release the full interview at a later date.