North Carolina tight end Eirc Ebron was taken by the Detroit Lions with the 10th pick Thursday night in the 2014 NFL Draft. But Ebron did something much more daring just hours before the event at Radio City Music Hall in Manhattan: He proposed to his girlfriend Brittany Rountree atop the Empire State Building.

Ebron proposed to his girlfriend of 2 years a few minutes ago. "A ball of nerves," he said. Bought the ring a week ago. "What better way?"

Here’s everything else you need to know about him:

1. He’s a Native of New Jersey

Despite being a native of Newark, New Jersey, Ebron went to college at Ben L. Smith High School in Greensboro, North Carolina. At high school level, he was considered a three-star recruit.

2. He’s Ranked as One of the Best TEs in the Nation

Ebron enrolled at the University of North Carolina in 2011. His best season coming in 2013 as a junior when he caught 62 passes for 973 yards, contributing three touchdowns for the team’s cause. As a reward, Ebron was nominated for the John Mackey Award for best college TE in the nation.

In November 2013, Ebron announced his intention for leave college and enter the 2014 draft. The NFL lists his strengths as:

Releases cleanly and accelerates into patterns. Outstanding athletic ability and receiving skills. Threatens every level. Advanced route runner. Pierces the seam and is a mismatch vs. man coverage — regularly bested defensive backs. Terrific quickness, agility, balance and body control. Catches cleanly off his frame. Makes one-handed grabs look routine. Wide catching radius. Catches on the move and has an extra gear to pile up yards. Excellent production. Will be a 21-year-old rookie.

Lacks ideal bulk. Can improve as a blocker, both in-line and on the move — could stand to improve technique, physicality and finish. Not equipped to lock horns with NFL defensive ends. Inconsistent adjusting to and fitting on moving targets. Could stand to play with more consistent intensity and focus. Makes the occasional concentration drop. Ordinary touchdown production. Can be loud, boisterous and overly egotistical, which will rub some people the wrong way. 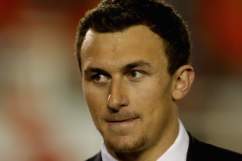 4. Ebron Was a Communications Studies Major

At college, he majored in communication studies, but it doesn’t look like he’ll be needing that any time soon. He’s the son of Eric Ebron Sr. and Gina Jackson. He just turned 21 on April 10 last.

5. His Fiancee is a Basketball Star

According to reports, Ebron and Brittany Rountree have been together for two years. She’s a basketball star at UNC where she plays as a guard. Rountree, a native of Jacksonville, Florida, plays as a guard.

Congrats to @Ebron85 for making his #NFLDraft special by proposing on the Empire State Building! #PressurePoints pic.twitter.com/ZTBV7OIImK 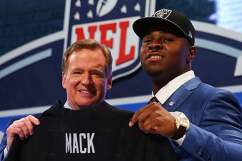