Scouts are raving about Auburn offensive tackle Greg Robinson, who the massive third-year sophomore who could be one of the first players taken in Thursday’s NFL draft.

1. He’s Regarded By Some As the Top Lineman in the Draft

The consensus among scouts is that Texas A&M’s Jake Matthews is the most polished offensive lineman in the draft, but that Robinson is more talented and has a higher ceiling.

Both are projected in most mock drafts to be among the first 10 players picked, but most experts have Robinson going off the board first.

Watch the video above for a comparison between Robinson and Matthews.

2. He Helped Lead Auburn to the National Championship Game

Just about every successful offense has a successful left tackle, and the Tigers, who shocked arch rival Alabama in the regular season en route to an SEC title and a national championship game appearance, were no exception.

Robinson’s run blocking ability was a key reason the Tigers surpassed preseason expectations and had one of their greatest seasons in history, coming within a late Florida State rally of winning their second national title in four years.

3. He Could Go as High as Second in the Draft

The St. Louis Rams, owners of the No. 2 overall pick in next week's NFL Draft, were at Auburn today working out @GRob_92.

Robinson is a sure-fire top 10 pick and could go as early as the Number 2 overall pick to the St. Louis Rams, who were at Auburn last week working out Robinson, according to the Opelika-Auburn News’ Alex Byington. The lowest most experts have him falling is to the Number 6 pick, where he’d land with the Atlanta Falcons.

The Cleveland Browns are extremely high on Robinson and would take him with the fourth pick if he’s available, according to ESPN’s Chris Mortensen.

4. He Entered the Draft Early to Support His Family After His Dad Died

Robinson left Auburn after three years in order to support his family, which is struggling in the aftermath of his father’s death.

He also has two brothers who have been incarcerated for dealing drugs, one of whom is still in prison.

Robinson, probably better than many of us, knows that football isn’t everything. The reason Robinson was in Indianapolis last week instead of in school is his family needs money. His father, Greg Blackledge, passed away last year. Robinson carries a reminder of him on his right shoulder — a tattoo of his face. Blackledge was a strong influence on his children, and he also sustained them financially through his pension, social security and disability checks after he was injured while working as a welder.

Adversity is nothing new to the Robinsons. The family grew up in Louisiana, but as Pompei reports, the family spent two years in Houston after their home was heavily damaged by Hurricane Katrina in 2005.

5. His One Weakness is Pass Protection

No prospect is perfect, even among consensus top 5 picks. And if there’s one hole in Robinson’s game, AL.com’s Joel Erickson explains, it’s his ability to pass block:

In a draft cycle that gets longer and longer each year, every prospect is picked apart and faulted for something or the other. For Robinson, the knock is his lack of polish in the passing game. Auburn’s run-oriented offense — the Tigers ran it on 72 percent of their snaps in 2013 — is nothing like the pass-heavy attacks in the NFL. 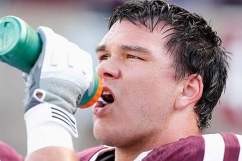