The Panthers have released a statement reading:

We are very disappointed to learn of the allegations involving Greg and are concerned for all parties as we continue to investigate.

Hardy has been dating the woman since September 2013.

1. The Charges Are Expected to be Minor

WCCB Managing Editor Jeff Monheit tweeted that Charlotte-Mecklenburg police responded to a call at Hardy’s girlfriend at 4:18 a.m. on May 13. He added that a warrant was issued for Hardy but the DE turned himself in. The woman, who lives at the 100 block of North Tryon Street, told responding officers that Hardy had assaulted and threatened her, reports NBC Charlotte. Hardy is listed at 6-foot-4 and 290 pounds.

2. It Isn’t Known if Hardy Will be a Panther Next Season

Hardy, 25, is a franchise tag tender with the Panthers. If he doesn’t sign a long-term with the team by July, he stands to make $13.1 million. He told The Charlotte Observer about the process:

It’s a reality of football. It’s a reality of business. They’ve got the ball in their court right now. If that’s what they choose to do, nothing but respect and love. Carolina’s my home. But I’ve got to go back to work. I’d rather be here if I can. But if not, it’s just business.

In the 2013 season, Hardy had a franchise record 15 sacks. By attending all of the team’s voluntary spring workouts, Hardy will be paid $1.3 million.

3. He Was an Outstanding Prospect in the 2010 Draft

Hardy was drafted in the sixth round as the 175th overall pick in the 2010 draft.

4. He Was a College Star at Ole Miss

Despite being eligible for the 2009 NFL draft, where he was considered one of the best pass rushers, Hardy opted to stay in school. In 2007, he achieved an SEC-best 10.0 sacks.

5. Hardy is a Friend of Michael Oher

He played high school football with Michael Oher of The Blind Side fame. Back in high school, Hardy was also a basketball star. 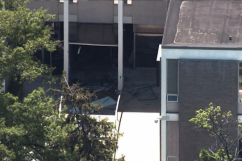 Suspect Rams WMAR Building With Truck, Barricades Himself Inside: 5 Fast Facts You Need to Know