Welcome to the stacked day 3 of Brazil’s 2014 World Cup. Today’s first game, Colombia vs Greece. In a total shut out, Colombia bested Greece 3-0.

This is only the second time in the history of soccer that these two teams have met. Lets see what happened:

The South American Christiano Ronaldo, James Rodríguez scores Colombia’s third goal in the final seconds of the game, making Colombia the winner in the 3-0 shutout against Greece. Watch the Vine above.

As the fierce second half continues, Teófilo Gutiérrez sneaks into the box to score Colombia’s second goal of the game, putting Greece down by two. Watch the Vine of the goal below.

The game seems to be in a bit of a stalemate as the two teams try hard to break each others’ defenses. One goal and a bunch of incredible saves later, we find ourselves at halftime with Colombia leading by one.

Looking the like the goalie was distracted, Colombia’s Pablo Armero is able to put in a key first goal just 5 minutes into the game. Watch the Vine of that goal above. 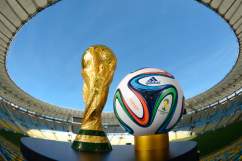 How to Watch the World Cup 2014 Live Stream Online