Jermaine Jones is the German-American defensive-midfielder who plays the sport more like its American football than soccer, earning a spot on the U.S. national team roster.

Jones scored the second goal of the game against Germany in the Group G match that ended in a 2-2 draw.

1. He Grew Up in a Rough Neighborhood

Jones grew up in Frankfurt-Bonames, a rough neighborhood the he is proud to call home. His parents met when his father, an African American U.S. Army soldier, was stationed in Germany. After his parents married, they moved to Chicago and the Greenwood, Mississippi, before moving back to his birthplace in Germany with his mother when his parents divorced. Before him and his father reconnected recently, he had no contact with him.

In the video above, Jones talked about how his father called him around his birthday and his wife encouraged him to speak with him. Jones ended up speaking with his father on the phone for 3 hours and has had a good relationship with him since. Jones finds comfort in the fact that his children will have their grandfather around now.

Jones’ style of play is a direct reflection of how he grew up- rough.

He told Fox Sports of his hometown:

For me, I like it. It’s a nice town. But it’s not easy to grow up there. You learn fast to grow up like a man.”

2. He Didn’t Make the German Team

In 2008, Jones made a genuine attempt at playing for the German national team, but was held back by injuries that kept him from playing whenever it was time to represent Germany and was cut this year by Joachim Loew. In 2010, he chose to utilize his dual citizenship to play for the U.S. national team under Bob Bradley.

Although he had played in only friendly matches and no actual official matches fro Germany, he was able to make the switch over to the U.S. side after a ruling that deemed it legal to switch to a different nation if you have that passport and have played 3 or less friendly matches for the original team.

3. His Wife Was Miss Germany

Jones and his wife, Sarah Gerth Jones, whom he adores, were married in 2007. The couple has been together for 10 years and has 5 children whom Jermaine talks about constantly. Jones has said in interviews that his family is the most important thing to him, and no matter how badly he plays, they can always make him smile.

Jermaine Jones is not a player that opposing teams enjoy playing against. Jones reputation is questionable due to the rough nature of his play in which he has racked up more yellow and red cards than almost any player in professional soccer.

As mentioned earlier, his style of play has a direct correlation with the way he grew up and where he has come from.

Look, if I wanted to hit him, I would just hit him. You know me, I’m not afraid. I was just creating some space.”

He hasn’t just gotten his reputation as out of control by taking people out physically on the field, but by his previous indiscretions centered around his partying habits that his coaches were well aware of. However after he has settled down and now has a family of his own he claims to have calmed down.

You can’t be this crazy guy that you always were before. Okay, sometimes on the field it happens again. But outside I’m relaxed. I don’t like to go out so much. I love to be home, to stay with my kids.”

Jones’ signed a 2-year contract with Shalke before the loan with a salary of $2.45 million per season.

Jones has been playing professional soccer since 2000. Until this year he has played for all teams in the top tier of the German league including Eintracht Frankfurt II and Bayer Leverkusen II with just a short loan in 2011 to Blackburn Rovers FC in 2011, which is in the English premier league.

This past March (2014), Jones was loaned to Turkey’s Beşiktaş J.K. where he will be till the end of the season.

I really like it. The supporters are some of the best I’ve seen anywhere in the world. I’ve settled in really well and it helps when you’re living in a city like Istanbul. It’s a great club and a great place to live.” 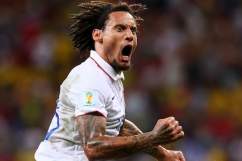 Loading more stories
wpDiscuz
1
0
Would love your thoughts, please comment.x
()
x
| Reply
Jermaine Jones is the defensive midfielder who plays soccer as if it's American football, earning a spot on the U.S. national team roster.