Michelle Wie is still considered the most notable women’s golfer after her debut in the golf world at the age of ten. The golf prodigy is currently in first place first at -1 for the day through 12 and -3 overall to stay in the lead going into the last few holes of the 2014 U.S. Women’s Open at Pinehurst and gunning to capture her first major.

Watch the video above to see her “For the Record” interview.

1. The U.S. Open Was Her First Victory in a Major

Despite Wie’s notoriety for having one of the biggest drives on tour and ranking top in the world, she had yet to win a major before this year’s U.S. Women’s Open.

Wie won the Open by 2 strokes over Stacy Lewis, shooting even par on the final day to finish at -2 overall. Lewis shot (-4) 66 in her last round, but still fell short.

Wie proceeded to drink out of the trophy and twerk following her first major victory.

The closest she had been to victory in the U.S. Women’s Open before this was in her first year as a professional in 2006 when she placed third.

VIDEO: Michelle Wie celebrates her first major win by drinking out of the trophy and twerking http://t.co/m62WeTRHYk pic.twitter.com/mvAHnzfKTV

Wie is the only child of South Korean immigrants, Byoong-wook and Bo Wie. Wie was born in Honolulu, Hawaii where she has lived for her entire life, giving her dual citizenship between the United States and South Korea. Wie ended up revoking her South Korean citizenship in February 2013.

Wie gets her talent on the course from her mother, Bo, who was the women’s amateur golf champion for South Korea in 1985, but golf talent wasn’t the only thing passed down. Bo was also a competitor in the Miss Korea beauty pageant, revealing where Michelle gets her good looks from.

Wie graduated her high school in Hawaii in the winter of 2006 at the age of 16 when she decided to move on the Stanford University, the alma mater of two of her family members. By the time she was a freshman in the fall of 2007, Wie became a part of Stanford University, but not a part of its golf team due to ineligibility based on her professional status.

She has yet to be at Stanford during a spring semester because of her vigorous professional schedule during the main season, forcing her to take leaves of absence.

3. She Turned Professional at the Age of 15

Wie’s debuted her amateur career in 2000 at the age of 10, when she qualified for the U.S. Women’s Amateur Public Links Championship. This would make her the youngest player ever to qualify for it. Watch the video above to see an analysis of Wie’s powerful drive.

Wie moved into her professional career in 2006 at the age of 15 after signing sponsorship contracts with big-time companies, Sony and Nike at the end of 2005. A week before turning 15, she had signed contracts worth $10 million per year.

Wie has often been criticized since then for he poor performances during her attempt to play in the men’s PGA Tour events, crumbling under the pressure and having yet to make a cut. In 2007, she miss the cut for the 2007 Sony Open by 14 shots. Criticisms since she has gone pro have also been geared towards what some golf fans have said in regards to her
“inappropriate outfits” that are considered a tad revealing for the traditional sport.

4. She Earned $19 Million During Her First Year On Tour

By the age of 18, Wie was finally allowed to join a tour since no professional tours, including the LPGA accept players under the age of 18. After kicking off her pro career in 2006, she made $19 million in earnings, and by 2007, the 18-year-old was ranked her as #4 on the Forbes Top 20 Earners Under 25.

By the age of 13, Wie was 6 feet tall and outdriving most of the men on the PGA Tour with 300 yard drives . Naturally, when Wie grew older, her love interests included some of the tallest guys on Stanford’s campus, reportedly including 7 feet tall, Robin Lopez who currently plays in the NBA. 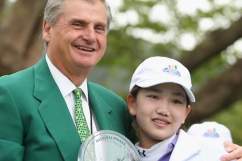 Loading more stories
wpDiscuz
0
0
Would love your thoughts, please comment.x
()
x
| Reply
Michelle Wie is tied for first going into the final day of the U.S. Women's Open and gunning to capture her first major.