The U.S. Open is underway at Pinehurst 2, and we’ve got you covered with all the information and updates you need to follow along. Watch the video above to see a preview of Pinehurst’s most unforgiving course, No. 2.

Rory McIlroy, Phil Mickelson and defending champ Justin Rose, were all among the players with tee times before 8 a.m. Eastern. The full list of tee times is right here.

TV coverage starts at 9 a.m. on ESPN, which has the first six hours of coverage.

You can watch online at WatchESPN.com or on the Watch ESPN app from 9 a.m. to 3 p.m. Eastern and 5 p.m. to 7 p.m. Eastern and at NBCSports.com or the NBC Sports Extra app from from 3 p.m. to 5 p.m. Both require cable provider log-in info.

You can also watch a livestream here on the U.S. Open website for free with no log-in required.

Follow the live leaderboard below and stay here for updates as the tournament goes along.

Brooks Koepka of the U.S. is leading the field at -3 after 7 holes of play.

Kevin Na off to a fast start. And yes, I just put "Kevin Na" and "fast" in the same sentence.

Kevin Na who is known for his slow play and only made the cut by default was tied for second with Grame McDowell, Dustin Johnson and Jimmy walker after finishing at 68, 2 under the course par.

.@PinehurstResort is a special place that forces you to be patient and pick your spots!! Let's do this!!! #usopen2014 #GoDJ

The real story is the 19-year-old amateur, Matthew Fitzpatrick who was paired with Justin Rose, last year’s U.S. Open Champion and Phil Mickelson, the 6 time runner-up of the U.S. Open which is the only tournament keeping him from having won every grand slam.

Fitzpatrick shot a 71 (+1) in the first round behind Phil by a stroke with a par for the course (E). Rose is trailing behind the amateur and Mickelson after finishing with a 72 (+2).

Jordan Speith finished up there on the leaderboard thus far with a 69 (-1), two shots ahead of Fitzpatrick.

Jordan Spieth and Matthew Fitzpatrick tied for second. Can celebrate by hanging outside 7-11 and getting an old guy to buy beer for them.

The power trio, Bubba Watson, Charles Schwartzel and Adam Scott teed off at 1:25 ET. Bubba is coming off a hot win from the Masters while No. 1 in the world Adam Scott has high odds, yet has never managed to clinch a victory at the U.S. Open. 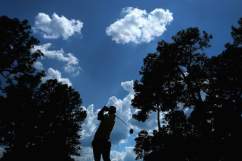