Just lived through a tornado. Children are missing. People are dead. Trees are down. Campers are flipped pic.twitter.com/UWxzE6hBqC

At least three people are dead after a tornado swept through Virginia’s Eastern Shore on Thursday, toppling trees, flipping over cars and injuring children at a local camping ground.

1. Hospitals in the Area Are Ready for ‘Mass Casualties’

My grandparents sat in their car to stay safe…And this is what happened… They're in the hospital, but doing well. pic.twitter.com/PgR6vX6FSL

ABC 13 reporter Nick Ochsner tweeted that three hospitals in the area are “preparing for mass casualty.”

Amandas Blankenship of the Eastville Volunteer Fire Co. told the media: “Several children have been injured at the campground. I don’t know how many, but they have called for several ambulances to go there.”

2. The Tornado Ripped Through a Campground Full of Kids, Causing ‘Devastation’

An unknown number of children were injured when the storm ripped through the Cherrystone Campground. WAVY News spoke to a woman who was camping at the site and told the station: “It’s just devastation at the campground.”

According to the campground’s website, Cherrystone is celebrating its 50th birthday this year. Earlier in 2014, the campground was named one of the top three in the nation for RVs.

Linda Zaremski, who lives close to the campground, told USA Today, “Debris was flying down the street — our chairs, beach balls. We lost power.”

3. Massive Hail Is Falling on the Area, Hampering the Rescue Effort

There are reports of golf-ball-sized hail falling in the area.

The Virginia Department of Emergency said a “possible tornado” had touched down in the area at 10 a.m. this morning. At 9 a.m., the NWS reported a waterspout over Chesapeake Bay. The Cherry Stone camping ground is just 11 miles from Chesapeake Bay.

Friend's uncle: "We did have some hail at the farm. One of our employees had his windows of his house blown out." @13NewsNow #stormmode 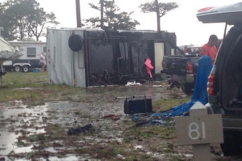 Eastern Shore Tornado: The Photos You Need to See

4. The Tornado’s Wrath Is Being Felt Throughout the Eastern Shore

A picture of the Cherrystone Camp Ground after the storm. (Virginia Department of Emergency Management/Facebook)

The area around Cheriton is covered with overturned vehicles and downed trees. Along U.S.Route 13 in Cheriton, a truck overturned, the driver was treated at a nearby hospital for injuries.

5. Thunderstorms Will Continue in the Area Until Tonight

Weather forecast indicates that thunderstorms are expected to continue in the area until tonight. CBS 6 says that the weather will produce “constant lightening and torrential downpours.”

Eastern Shore Tornado: The Photos You Need to See

Loading more stories
wpDiscuz
0
0
Would love your thoughts, please comment.x
()
x
| Reply
At least three people are dead and children are missing after a tornado ravaged the Cherrystone Campground along Virginia's Eastern Shore.