Around 80 dinghies were capsized in stormy weather on a lake in Northern Ireland. According to the British coast guard, the boats began capsizing in the storm at around 9 a.m. Eastern time.

Around 100 people, including some children, are in the water needing rescue, reports the Irish Independent. Those in the water were hit by a “freak wave”, according to The Irish Times.

2. It Was a World Championship Race

The dinghies were taking part in the GP14 World Championships which were being held at the East Down Yacht Club on Strangford Lough. The competition was due to run from August 9-14. The Daily Mirror reports that there were competitors from all over the world involved in the race.

3. It Prompted a Mass Rescue Operation

The harbour is a sea of blue flashing lights. This is really a major incident that is being dealt with at the moment.

4. Initial Reports Say Everybody Was Rescued

The staff at Ulster Hospital are on stand-by for a mass casualty incident. The Independent reports that there are no missing people after the accident. Around 10 people are being treated for minor injuries, reports the BBC. One of those hurt suffered head trauma.

5. Strangford Is Located Close to Belfast 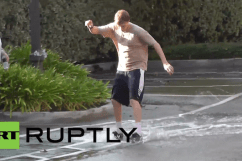 PHOTOS: UCLA’s Campus Is Under Water After Pipe Broke

Loading more stories
wpDiscuz
0
0
Would love your thoughts, please comment.x
()
x
| Reply
Up to 100 people, including children, are being rescued from the water in Northern Ireland.