Darren Wilson has been named by Ferguson police Chief Thomas Jackson as the cop who shot unarmed teen Michael Brown on August 9.

Brown, 18, was shot dead by Wilson at the 2900 block of Canfield Drive in Ferguson, Missouri, on Saturday August 9.

1. Wilson Was Injured in the Brown Shooting

Darren Wilson was police officer who killed Michael Brown, has served for 6 years, no disciplinary action against him pic.twitter.com/lkyBwidaDJ

The officer was on a sick call with an ambulance when he went to answer a 911 call regarding a robbery at a convenience store close to where Michael Brown was shot dead on August 9. According to Chief Thomas Jackson, Wilson stopping Michael Brown and his friend, Dorian Johnson, had nothing to do with the robbery.

The officer was treated for injuries after the incident. At a later press briefing, Jackson said that the aftermath has been “devastating, absolutely devastating” to Wilson.

You can read the full incident report here:

Man if they identify a black officer I'll give up on the American justice system #Ferguson #DarrenWilson pic.twitter.com/u8bGIdwYmK

The officer has been placed on administrative leave, according to the St. Louis Post-Dispatch. He is six-year veteran of the police department. Wilson was described as a “nice young man.” Chief Jackson added later that:

We had no complaints about the officer. He was a gentleman. A quiet officer. He has been an effective officer.

NBC News’ reporter Tom Winter tweeted that in February, Wilson was awarded a commendation for “extraordinary effort in the line of duty.” Wilson has been based in Ferguson for four years, previously he spent two years in the different jurisdiction of Jennings.

St. Louis reporter Aamer Madhani has said that Wilson lives in Crestwood, Missouri. Madhani tweeted that when he went to Wilson’s home in the St. Louis suburb, a police officer came by to say Wilson had left “days ago.” Crestwood is located about 25 miles south of Ferguson.

4. There Is Another Darren Wilson in the St. Louis PD

A different St. Louis police department officer named Darren Wilson “fears for his safety,” reports Fox 2. That Darren Wilson is the president of the Ethical Society of the Police and not the same officer who shot Michael Brown. 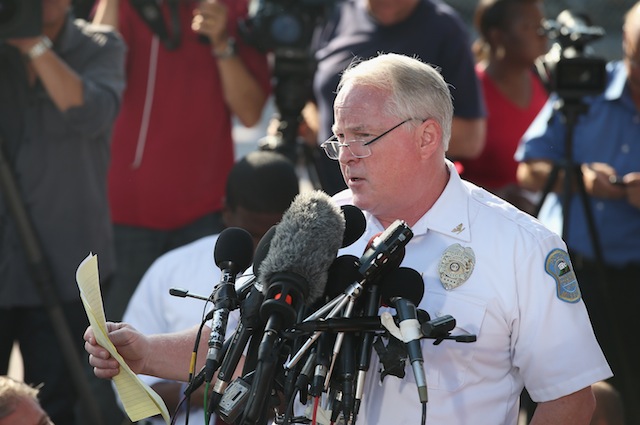 5. Police Have Identified Mike Brown as a Robbery Suspect

In a press release, Ferguson police identified Michael Brown as a suspect in “strong-arm robbery” of a convenience store, just prior to the shooting. The robbers are alleged to have stolen cigars. The police report states that Brown “grabbed” a store clerk and “pushed him back” after stealing “numerous packs of cigars.”

Info handed out ONLY about alleged robbery. NO info included about interaction with Officer Wilson, the shooting.

Brown’s friend, Dorian Johnson, has also been named as a suspect in the convenience store robbery. The St. Louis Post-Dispatch reports that Johnson’s lawyers are saying that their client was in the store and that cigars were stolen. Chief Jackson confirmed that the cigars were found on Brown’s dead body. He added that Wilson’s stopping of Brown, had nothing to do with the robbery.

The news follows another night of protests in Ferguson. These protests came after Gov. Nixon told the St. Louis County police to stand down in Ferguson. The agency was replaced by the Missouri Highway Patrol. Reports from the ground in the aftermath of the announcement indicated that residents are “angry, but peaceful.”

The Ferguson PD was subject to numerous Sunshine requests regarding the name. Police had previously said they wouldn’t name the shooter. There has been no disciplinary action taken against Wilson, according to Jackson. Missouri Gov. Jay Nixon welcomed the naming of the officer, he told NBC News: “It’s good news after a great deal of prodding they’re going to release the name of this officer.”

Read More
5 Fast Facts, Breaking News, Crime, Ferguson, Michael Brown, Shooting
Darren Wilson has been named as the cop who killed Michael Brown in Ferguson, Missouri, on August 9. The announcement was made by Chief Thomas Jackson.