Michael Sam could end up on an NFL roster this year. But he won’t be on the St. Louis Rams’ 53-man squad when the Rams open the season.

Sam, who’s trying to become the first openly gay player to play in an NFL regular season game, was cut Saturday when St. Louis trimmed its roster from 75 players to 53. The news was first reported by ESPN’s Adam Schefter.

1. Sam Played Well in the Preseason

Sam, a seventh-round draft pick, came off the bench at left defensive end in all four of the Rams’ preseason games and played well for the most part.

He made a tackle shortly after coming into the game in his NFL debut against the New Orleans Saints and had 2 sacks two weeks later on Johnny Manziel.

He made a team-high 6 tackles in St. Louis’ preseason finale against Miami and finished the preseason with 11 tackles.

2. Fellow Rookie Ethan Westbrooks Made the Team as Its 9th Defensive Lineman

Coach Jeff Fisher’s decision came down to a choice between Sam and undrafted rookie Ethan Westbrooks as the team’s ninth defensive lineman. The two battled for the spot throughout camp, but Fisher indicated he was more impressed with Westbrooks in the Rams’ preseason finale Thursday.

From Jim Thomas in the St. Louis Post Dispatch:

The headliner on that front obviously was Sam vs. Westbrooks — one last time. Sam was very active in the first half, and according to unofficial press box stats led the Rams with six tackles by game’s end. But Westbrooks wasn’t far behind with four tackles. One of those tackles came on his second sack of the preseason, and he added two quarterback hits.

“I’m gonna have to look at the tape, but Ethan was making a lot of plays every time I looked,” Fisher said.

“I really didn’t see anything good or bad out of Mike … but he played hard,” Fisher said.

3. Other Teams Have 24 Hours to Claim Sam

The other 31 teams in the league have 24 hours to claim Sam. If one of them puts in a claim, he’ll be added to the team’s roster.

If none of them do, the Rams will have the option of adding Sam to their 10-player practice squad. Practice squad players are not on a team’s active roster, though it’s fairly common for a player to be summoned from the practice squad if a need arises because of an injury or suspension.

The league minimum for players on active roster’s is $420,000 per year. Practice squad players earn a minimum of $6,300 per week, which translates to $107,100 over the course of a full season. Blogging the Boys has a good primer on practice squad eligibility and salary structure.

4. Sam Said He Expects to be on Someone’s 53-Man Roster

The consensus among scouts, coaches and fellow players is clear: Sam can play in the NFL. The question entering cutdown day was merely whether he would get a chance with the Rams.

After Thursday’s game in Miami, Sam said he’d grade his preseason performance a B+.

Watch the video above for a report from Silverman.

5. Sam Fit in Well With the Rams & Proved Not to Be a Distraction

So much for the notion that Sam would be a distraction or not fit in in the Rams’ locker room. Sam generally got rave reviews from his teammates, and the closest thing during camp to a “distraction” had nothing to do with anything Sam did and everything to do with what ESPN admitted was sloppy reporting by Josina Anderson.

Anderson, citing an anonymous player, reported live on the air that Sam appeared hesitant to shower at the same time as his teammates. The report was widely ridiculed and ESPN issued a public apology to the Rams for not living up to the network’s reporting standards. 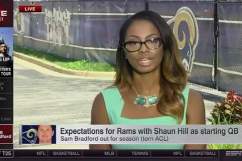