ESPN reporter Josina Anderson has been the recipient of an avalanche of criticism after delivering an on-air report quoting an anonymous St. Louis Rams player about Micahel Sam’s showering habits.

Anderson was in St. Louis Tuesday, when Sam survived the first round of cuts. She delivered a live on-air report in which she mentioned that an unnamed Ram told her that Sam, the first openly gay player to play in an NFL training camp, would wait until his teammates were done showering before showering himself. You can watch the report on the video above.

Everyone from LGBT activists to Sam’s teammates to other media members ripped the report as thoughtless and entirely unnecessary.

1. An Anonymous Player Told Anderson: Sam ‘Is Respecting Our Space’

Via Talking Points Memo, here’s the transcript of Anderson’s report: The part, quoted below, that drew criticism came after Anderson mentioned that fellow defensive lineman Kendall Langford said that Sam was “just one of the guys.”

But another Rams defensive player told me that quote Sam is respecting our space and that from his perspective, he seems to think that Michael Sam is waiting to kind of take a shower as not to make his teammates feel uncomfortable while Langford and linebacker Alec Ogletree told me that they didn’t know that specifically and also weren’t tracking that. Now while Langford told me, ‘Listen, I have not been in the shower at the same time as Michael Sam,’ he said that there definitely could be a million reasons as to why that is. He said he could be doing extra work on the practice field, he could be riding his bike, he could be doing extra cardio, but overall Langford said he seems to be adjusting to the life in the NFL and the speed of the game.

On Tuesday's Michael Sam report: "ESPN regrets the manner in which we presented our report. Clearly (cont) http://t.co/pqcezX45ii

After criticism of the report began pouring in, ESPN issued a statement to Talking Points Memo defending Anderson’s report:

In response to recent questions about Michael Sam fitting in with the team, multiple Rams brought up the shower topic and we relayed that information as part of our reporting.

Talking Points Memo also relayed this comment, which the site said came in an email exchange with an ESPN source.

We did not sensationalize the reporting. It was the last part of a news segment — not the headline or lead item in the report. … The player who answered our reporter’s question directly brought it up on his own – she asked how Michael Sam is fitting in. She did not ask a shower question. … Michael Sam wasn’t made available today for comment, so we didn’t have something directly from him on this.

But later Tuesday, ESPN walked back the defense of the report and issued this statement:

ESPN regrets the manner in which we presented our report. Clearly yesterday we collectively failed to meet the standards we have set in reporting on LGBT-related topics in sports.

I’m extremely disappointed in her piece. I think it’s unethical,” Fisher continued. “I think it’s very, very unprofessional. Not only the piece itself, the content. The manner in which she did it.

Fisher, whose team flew to Miami Wednesday in preparation for Thursday’s preseason finale against the Dolphins, also told the paper that Anderson violated the team’s media policy by contacting players on their cell phones away from the team’s facilities.

Obviously she came in, in all likelihood to see if there was gonna be a roster move at the 75 cutdown as it relates to Mike Sam. That didn’t happen. But she needed to do something, and it’s my understanding that she manufactured this story.

She was out of line because she went and contacted several players on their personal time. Misled them with questions and then put this piece together.

4. The Head of Production & Programming for ESPN Called the Rams to Apologize

The Post Dispatch reported that John Wildhack, ESPN’s head of production and programming, called the Rams to apologize for the story.

“We appreciate John Wildhack reaching out to us and apologizing, and their willingness to communicate and work through this with us,” Fisher told the paper.

5. The Rams’ Chris Long Called Out ESPN in a Tweet

Dear ESPN, Everyone but you is over it.

Among the countless people who criticized Anderson’s report was Rams defensive end Chris Long, who tweeted “Dear ESPN, everyone but you is over it.”

There’s no word on whether ESPN will take any disciplinary action against Anderson. But the network has suspended on-air personalities twice in the past two months: Stephen A. Smith for talking about the need for women not to provoke domestic violence, and Dan LeBatard for a stunt in which he paid for billboards in Cleveland saying “you’re welcome” to LeBron James on behalf of the city of Miami, which delivered James to championship rings in four seasons with the Heat. 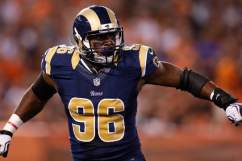