9-year-old girl accidentally kills shooting instructor with UziMohave County Sheriff's officials released this video of shooting instructor Charles Vacca, of Lake Havasu City, moments before he was accidentally shot by a 9-year-old girl he was teaching. Authorities say the girl pulled the trigger and the recoil send the gun over her head. Vacca later died of his injuries. The incident occurred at…2014-08-26T23:20:38.000Z

A 9-year-old visiting the Bullets and Burgers shooting range in White Hills, Arizona, accidentally killed her instructor on Monday.

A video of the incident, filmed by the girl’s parents, has just been released by the local sheriff’s department. Watch it above.

Charles Vacca, 39, was teaching the girl to shoot an Uzi when the accident occurred.

An Uzi is a type of sub-machine gun.

After successfully teaching her how to shoot it on single-shot mode, he tells her, “Alright, full auto,” and switches it to automatic.

The girl begins to shoot, but the kickback causes her aim to swerve up and left, and she ends up shooting Vacca in the head.

Vacca was a military veteran, a staff sergeant in the United States Army. 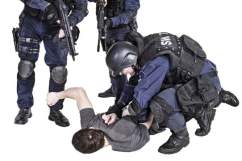 Read More
Arizona, Guns, Raw Videos, Youtube
An instructor at the Bullets and Burgers shooting range in White Plains, Arizona was killed after the young girl he was teaching lost control of her machine gun.