Jaylen Fryberg is reportedly the shooter in the Pilchuck High School shooting incident.

Fryberg was a freshman at the school, and like many of his peers, openly shared his thoughts online. While his emotions were wide-ranging, some of his recent Twitter posts, in particular, were emotional and angry.

His Facebook, Twitter, and Instagram also featured heavily a girl who appears to have been his girlfriend. According to reports from other students, the two may recently have broken up.

Such reports also say that he may have recently been in a fight at football practice, and had been suspended from school, returning only days before the shooting.

1. He Posted About Disputes Over His Girlfriend

He posted in September about a dispute with an unnamed acquaintance referencing his girlfriend. This is before the two allegedly split.

Did you forget she was my girlfriend????

Dude. She tells me everything. And now. I fucking HATE you! Your no longer my "Brother"!???

The break-up seems to have happened recently, after the two attended Homecoming together. In a picture from the girl’s Twitter account, she shared a picture of their feet in matching sneakers.

She posted this picture of the two on August 3rd. 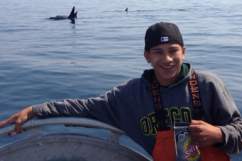 2. He Made Worrying Statements About Revenge Three Months Ago

He tweeted in August that “Your(sic) gonna piss me off… And then some sh**s gonna go down and I don’t think you’ll like it…”, and “Your (sic) not gonna like what happens next”.

Your gonna piss me off… And then some shits gonna go down and I don't think you'll like it…???

His last tweet was posted on the morning Oct. 23, the day before the shooting.

In June, he tweeted about wanting to die.

4. He Posted Pictures of Hunting and His New Gun

He posted an Instagram three months ago of the gun his parents gifted him for his birthday. This is not believed to be the gun that he used in the shooting.

He also posted pictures of his hunting kills and the hunting trips he took.

The New York Times reported that he said on Facebook,