Manchester High School in Midlothian, Virginia, was placed on lockdown after a horrifying stabbing occurred on campus. The incident was first reported around 10 a.m. on October 13.

1. Students Are Saying Someone’s Ear Got Sliced Off

Scene outside Manchester High School. On lockdown after altercation. pic.twitter.com/BO86QL9dQe

One student has been arrested. There have been no reported motives for the attack which happened inside of the school’s band room, reports NBC 12. Police have not said what charges the student will face. According to students tweeting about the incident, one student sliced off another’s ear. CBS Richmond reports that students were texting similar details to their worried parents.

Prayers go out to the boy at Manchester today? I don't understand why people do the things they do

One student is being treated in a local hospital with multiple stab wounds. His injuries have been described as “serious.” CBS 6 reports that this was an altercation between two students involving a knife.

3. A Lockdown Remains in Effect

Police have blocked off front entrance of the school. Concerned parents on scene too. Very tense. @CBS6 pic.twitter.com/lmf21d47XW

The school is on lockdown, reports NBC 12. The station also says that phone message was sent to parents telling them that there had been an “altercation.” According to WRIC, the phone call told parents:

This is Pete Koste, principal at Manchester High School.
I’m calling to let you know that our school is currently on lockdown as we investigate an altercation between two students. Police are on site and investigating, and one student is in custody.

At this time, it appears that the incident was limited to one classroom but all students will remain in lockdown until police have left. We will share information as soon as we have it.

Per our normal lockdown protocols, please do not call or come to the school.

A large police presence is being reported in close proximity to the school.

Parents are meeting here, at the Clover Hill Assembly of God church close to the school. (Google Street View)

4. The School Has a Massive Student Body

There are 2,155 students enrolled at Manchester High School. It’s located on Bailey Bridge Road in Midlothian, about 20 miles south of Richmond, Virginia.

Manchester High School is the alma-mater of Kavell Conner of the San Diego Chargers and Sean Marshall of the Cincinnati Reds. Above is footage from Manchester’s big football game with local rivals Clover Hill. 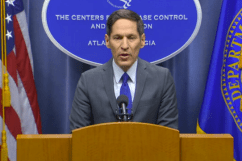 Dallas Nurse Gets Ebola: 5 Fast Facts You Need to Know

Read More
5 Fast Facts, Breaking News, Stabbing
A student got his ear sliced off, according to students.