A nurse in Dallas has tested positive for Ebola, marking the first known transmission of the disease in the United States, officials announced Sunday morning.

1. The Patient Is a Female Nurse

At a Sunday morning news conference, Centers for Disease Control Director Tom Frieden said the patient is a female nurse at Dallas Health Presbyterian Hospital. Officials did not identify her.

Frieden said the nurse began feeling symptoms of the virus and immediately went in for a blood test, which came back positive. Frieden made similar comments prior to the news conference in an interview on CBS’ Face the Nation, which you can watch above.

Frieden said the nurse provided extensive care to Ebola patient Thomas Eric Duncan, who contracted the virus in Liberia and developed symptoms in Texas. Duncan died at Dallas Health Presbyterian on October 8, just 10 days after he was hospitalized.

The nurse was not on a list of 48 people who were being monitored after coming into contact with Duncan because that list was compiled before Duncan entered the hospital for treatment.

3. A Breach of Protocol Led to the Transmission

#Ebola: "The fact we don't know of a breach in protocol is concerning, because clearly there was" – head of @CDCgov pic.twitter.com/FJIp2rKPbj

Frieden said a breach of protocol led to the transmission, though the nurse could not identify a specific breach. One possibility is that she came into contact with the virus while removing her protective suit.

Frieden stressed that the virus does not spread through the air, but healthcare providers have to be extremely diligent with protocol when it comes to people coming into physical contact with Ebola patients.

4. Additional People Who Treated Duncan Are at Risk

The patient was assessed Friday and tested positive on Saturday after reporting her own symptoms. It’s believed that only one person came in contact with her during the time she may have been infectious. That person is being monitored.

Duncan came into contact with at least 48 people before he was isolated, and doctors are monitoring the 48. The nurse who tested positive was not on the initial list of 48.

Dallas Mayor Mike Rawlings told CNN that a haz-mat unit from the Dallas Fire Department cleaned up and decontaminated the public areas of the apartment complex where the nurse was living, and police are keeping people out of the area and going door-to-door talking to residents.

“We have knocked on every door on that block,” Rawlings told the network.

5. Frieden Vowed Doctors Will ‘Break the Links of Transmission’

Frieden said officials are working diligently to “break the links of transmission.” 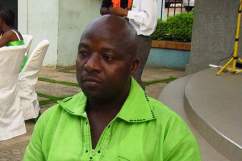