A teenager was found dead in Ferguson inside a car with a gun shot to his head and his clothes burned on the night when extreme rioting engulfed the town. On November 25, St. Louis County prosecutor Bob McCulloch announced that Officer Darren Wilson would face no charges in the shooting dead of unarmed teenager Michael Brown on August 9. As news of that decision filtered through, rioting broke out across Ferguson.

KSDK in St. Louis reports that a man was found dead close to the Canfield Apartments on the morning of November 25. The Canfield building is where Michael Brown was killed by Officer Wilson in August. The man was found at around 9 a.m. with police calling the death “suspicious.”

Fox TV St. Louis reporter John Pertzborn tweeted that the victim in the case has his clothes burned and that he was shot in the head. He added that the car was from East St. Louis, according to the license plate. The victim was black.

During the rioting in Ferguson, the Los Angeles Times reports that 61 people were arrested and multiple others were injured. There had been no reports of fatalities during the rioting. 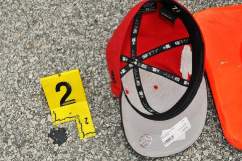 Loading more stories
wpDiscuz
2
0
Would love your thoughts, please comment.x
()
x
| Reply
The man had his clothes burned and had been shot in the head.