A U.S. hostage, held in Cuba since 2009, has been freed. On December 17, it was announced that Alan Gross was released by Cuban authorities on humanitarian grounds and had returned to the US. His release looks to have paved the way for the easing of sanctions between the U.S. and Cuba. President Obama announced after Maryland-native Gross was back on U.S. soil that economic restrictions, travel bans and communications between Cuba and the United States would greatly improve. This departure will also result in a new U.S. embassy in Havana and a Cuban consulate in Washington D.C.

1. He’s Been Exchanged for 3 Cuban Agents Imprisoned in the US

The Associated Press reports that the United States government had requested that Gross be released on humanitarian grounds. The agency was quoting an anonymous Obama administration source. The AP later reported that Gross’ release was in exchange for three Cuban agents who were being held in US prisons. The three men are said to be members of the so-called “Cuban 5.” They have been held since September 1998. According to the National Committee to Free the Cuban Five the group are:

The Cuban Five are five Cuban men who are unjustly imprisoned in the United States after being arrested by the FBI on Sept. 12, 1998 and convicted in U.S. federal court in Miami in 2001, in a political prosecution by the U.S. government.

Talks to free Gross have been ongoing since 2013 and were facilitated by Pope Francis, reports CNN. In addition to Gross, Cuba has agreed to release 53 people identified as political prisoners by the U.S. government.

2. He Had Been on Hunger Strike

Gross’ attorney told the public on April 8 that he has been on a hunger strike since the beginning of April in order to protest his treatment by both the United States and Cuban government. Gross believed that both governments have been failing to cooperate at the expense of his health and freedom.

Given to his legal team over a phone call back in April, Gross released the following statement:

I am fasting to object to mistruths, deceptions, and inaction by both governments, not only regarding their shared responsibility for my arbitrary detention, but also because of the lack of any reasonable or valid effort to resolve this shameful ordeal.

Upon his release, Alan Gross told the media, “What a blessing it is to be a citizen of this country.” He added that he was accused of being a “subversive” in Cuba, though Gross said “Cubanos are incredibly kind, generous, and talented. It pains me to see them treated so unjustly.”

3. He Was Arrested for Smuggling a Satellite Phone to Cuban Jews

According to the Miami Herald, Gross, a U.S. government subcontractor working for the U.S. Agency for International Development (USAID), was arrested at the Havana airport on December 3, 2009. Gross allegedly smuggled electronic equipment into the country with the intended purpose of providing the small Jewish community in Cuba with a satellite phone that would be able to bypass Cuba’s restrictions on Internet and telecommunications.

The United States and Cuba have hindered any diplomatic progress on Gross’ case since his initial arrest. Diplomatic cables released by Wikileaks revealed that it took 25 days for a U.S. diplomat to contact Gross. Gross, however, was already meeting regularly at that time with a Cuban lawyer attempting to negotiate the release of five suspected Cuban spies that were imprisoned in Florida.

Starting in mid 2011, U.S. and Cuban authorities had what were considered at the time to be productive talks, but ultimately diplomacy did not prevail.

4. He Is Said to Be in Poor Health

The Washington Post reports that since his arrest, the once 250-pound Gross has lost over 110 pounds, and his hunger strike will obviously exacerbate this weight loss. In 2012, Gross’ wife began to publicly worry about her husband’s health after the United States government said it believed Gross may be suffering from cancer. The Cuban government fired back, saying it had preformed a biopsy on a growth but found no proof of cancer. The Cuban government released the following statement after the U.S. condemned its treatment of an ill prisoner:

The U.S. government is lying once again to the public, saying that Mr. Gross has cancer and does not receive adequate medical care. These lies have not stopped, even after the results of the biopsy conducted on the lesion on his back were delivered to his family and U.S. authorities.

At his press conference on the day of his release, Gross addressed some of his health concerns, saying:

I want to thank all of the members of Congress of all sides of the aisle … who spoke up or visited me, subjected themselves to my ranting, and helped me regain some of my weight. Even in Cuba, M&Ms melt in my mouth.

On April 4, the AP released an investigative report that claimed USAID, Gross’ former agency, which is dedicated to promoting democratic values abroad, had promoted an illegal Cuban version of Twitter. The plan for the program, called ZunZuneo, was to entice users to use the platform before introducing more political and anti-Cuban regime content. The AP reports that the program drew tens of thousands of followers who did not know it was backed by the United States Government.

It is possible that Cuba, ever watchful for U.S. intervention in its domestic affairs, may see the continual undermining of its authority by way of U.S.-backed technology as a continuation of Gross’ work. 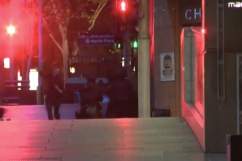 Loading more stories
wpDiscuz
1
0
Would love your thoughts, please comment.x
()
x
| Reply
Alan Gross has been freed from a Cuban jail after five years in captivity. He was released and returned to the US on December 17.