A transgender teen committed suicide and left a devastating note on Tumblr after her Christian parents refused to acknowledge that she’s a girl. Leelah Alcorn was born Joshua Alcorn in Kings Mill, Ohio. She killed herself by stepping in front of a tractor-trailer on I-71 in Warren County, Ohio, in the early morning hours of December 28.

1. Alcorn Posted a Heartbreaking Suicide Note to Tumblr — Set to Publish After She Died

Alcorn left a suicide note on her Tumblr account, Satan’s Wifey. The note was set to auto-post after Alcorn took her own life. She wrote that her Christian parents refused to acknowledge her transition and brushed it off as a phase. She wrote “If you are reading this, it means that I have committed suicide and obviously failed to delete this post from my queue.”

Alcorn goes on to say that she began identifying as a girl when she was 4 years old. She added in her tragic note, “When I was 14, I learned what transgender meant and cried of happiness. After 10 years of confusion I finally understood who I was. I immediately told my mom, and she reacted extremely negatively, telling me that it was a phase, that I would never truly be a girl, that God doesn’t make mistakes, that I am wrong.”

2. After the Suicide, Her Mother & School Still Referred to Alcorn as ‘Joshua’

My sweet 16 year old son, Joshua Ryan Alcorn went home to heaven this morning. He was out for an early morning walk and was hit by a truck. Thank you for the messages and kindness and concern you have sent our way. Please continue to keep us in your prayers.

Her page makes no reference to the name Alcorn wished to be called or that her child committed suicide.

The community relations coordinator for the local school district, also referring to Alcorn as a male, said, “Our thoughts and prayers are with Joshua’s family and friends at this tragic time.” An obituary tribute on the school website (seen above) referred to Leelah as a beloved “son and brother.” Local media in Ohio, likewise, have referred to Alcoron almost exclusively as “Joshua” and as a male.

3. Her Death Has Sparked Calls for a National Law Banning Conversion Therapy

In her suicide note, Alcorn wrote that her parents tried to make her go to Christian therapists to try to stop her transition, an apparent reference to the controversial practice known as conversion therapy.

The newly formed nonprofit Transgender Human Rights Institute is seizing the opportunity to call for a national ban on conversion therapy through a proposed “Leelah’s Law.” In a press release the institute writes:

After being subjected to years of religious based bias, life threatening ‘transgender conversion therapy’ and forced isolation, Leelah Alcorn took her life on Sunday, December 28, 2014 by stepping in front of a semi-truck. It is well known that trying to erase, delegitimize or force a person into a false gender identity can severely harm the individual and ultimately lead to death. Leelah was subjected to a life threatening practice by her parents that combined with erasure and suppression of her gender identity ultimately caused her death. At no time should a transgender person ever be subjected to psychological brainwashing tactics based on religious beliefs. The utilization of religious based ‘transgender conversion therapy’ is an atrocity against our youth and needs to be banned in all 50 states.

There’s a Leelah’s Law Facebook page, along with a sister page, Justice for Leelah Alcorn.

In another post on Alcorn’s Tumblr, titled “Sorry,” which was also posted after her death, Alcorn wrote a tribute to her friends and family. To her young sister, Amanda, she wrote:

You are going to have such a wonderful life. You are the most talented and pretty little girl I’ve ever met and I love you so much, Amanda. Please don’t be sad. I’m going to miss you so very much. I love you.

To her other sister, Tiffany, she wrote:

We haven’t talked much recently since we’re both so busy but I’m so happy you’re my sister. You are so courageous and determined to achieve what you want, you can accomplish anything. I love you.

To her brother, Justin, she wrote:

We’ve been jerks to each other a lot recently but I really do love you. You get on my nerves almost all the time but no matter what a part of me will always love you. Sorry for picking on you so much when we were kids.

And to her parents, she wrote:

F–k you. You can’t just control other people like that. That’s messed up.

I don’t really feel the need to apologize to anyone else … odds are you didn’t give a shit about me and if you do, you did something that made me feel like shit and you don’t deserve an apology.

Also, anyone who says something like “I wish I got to know him better” or “I wish I treated him better” gets a punch in the nose.

On the CDC’s website, the section on LGBT Youth reads:

Some LGBTQ youth are more likely than their heterosexual peers to experience difficulties in their lives and school environments, such as violence.

The page also says that LGBTQ youths in grades 7-12 were twice as likely to have attempted suicide than their heterosexual peers.

In one study specifically of transgender students, a shocking 25 percent of those surveyed had attempted suicide. 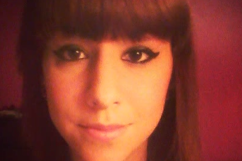 Loading more stories
wpDiscuz
493
0
Would love your thoughts, please comment.x
()
x
| Reply
A transgender teen committed suicide and left a devastating note on Tumblr after her Christian parents refused to acknowledge that she's a girl.