A Metro-North train carrying hundreds of commuters burst into flames after colliding with a vehicle on the tracks near Valhalla, New York, at rush hour on Tuesday, killing at six and injuring many more.

According to Metro-North, the fatal victims included the female driver who was outside the vehicle — a black Jeep Cherokee — and five male train commuters.

The deaths were confirmed by the Metropolitan Transportation Authority.

At least 12 people are thought to be badly injured.

The force of the collision pushed the vehicle about 150 yards up the track.The vehicle and the front of the train caught fire, according to Metro-North Railroad spokesman Aaron Donovan.

The train was from New York City going northbound on the Harlem Line. CBS reported there were “multiple injuries.”

More than 750 passengers were estimated to be onboard, including Justin Kaback, commuting home to Danbury, Connecticut.

“I was trapped. You know there was people in front of me and behind me and I was trapped in the middle of a car and it was getting very hot,” he told ABC News. “All the air was turned off so there was no circulation so it was definitely scary especially when people are walking by on the outside and they said, the train’s on fire, there’s a fire.”

A staging area for the wounded was set up in a nearby sports club parking lot.

1. The Railroard Crossing Gates Came Down on Top of a Jeep, Trapping It on The Track

Metro-North Train Crashes into Car in NYA train collided with a car on the tracks in Valhalla, N.Y., killing six people and disrupting service on Metro-North's Harlem Line on Feb. 3, 2015. Emergency vehicles have responded to the scene. The accident happened at the Commerce Street railroad crossing, which is near the Taconic State Parkway.2015-02-04T01:07:42.000Z

The railroad crossing gates had come down on top of the Jeep, which was stopped on the tracks, according to MTA spokesman Aaron Donovan. The driver got out to look at the back of the car, then got back in and drove forward when she was struck.

The first three cars of the train were evacuated in the chaotic aftermath of the crash. By about 7:30 p.m. the fire appeared to be largely extinguished but smoke was still billowing from the charred carriages.

3. Service on the Harlem Line Was Suspended Between North White Plains & Pleasantville

The Metro-North railroad is the busiest commuter train network in the United States, surpassing the Long Island Railroad in 2014.

Buses were brought in to bridge the gap in Westchester County between North White Plains and Pleasantville.

4. A Rail Pierced the Train Carriage 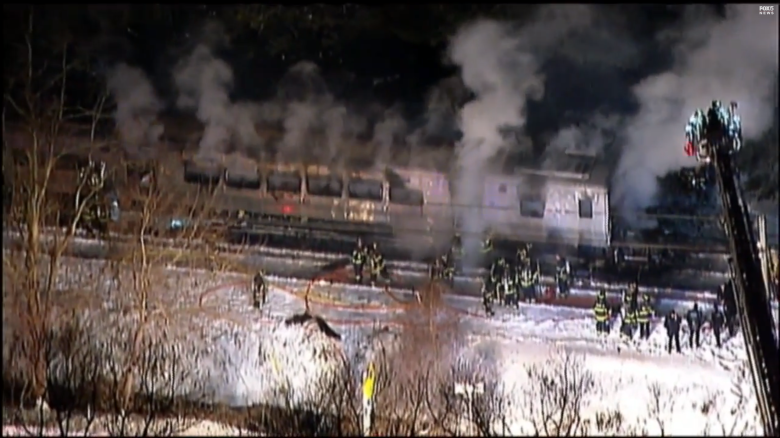 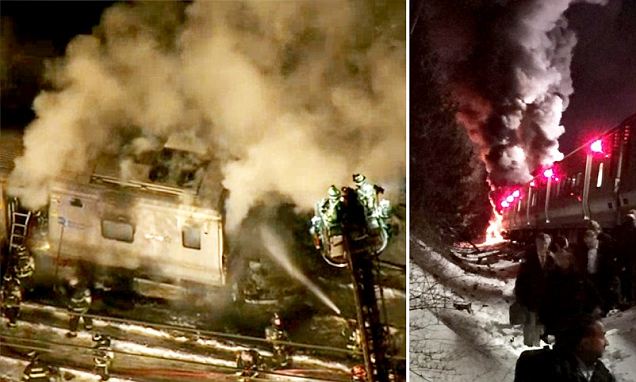 A rail pierced the side of the train but did not hit any passengers, said the MTA.

5. The Collision Happened on the Commerce Street Crossing

MTA spokesman Aaron Donovan said later that earlier reports of two cars being hit in the collision at the Commerce Street crossing were incorrect.

The train left Grand Central around 5:45 p.m. and was running express, Donovan said.

Read More
Breaking News, New York, Train
A Metro-North train collided with a vehicle on the tracks, killing six people and injuring more than a dozen of the 800-850 people on board the train.