A reporter from Jewish news outlet NRG decided to gauge the response of Parisians to Jews by being filmed walking the streets of the French capital in a skullcap.

The shocking hidden camera footage shows Zvika Klein being harassed, insulted and even spat at in shameful displays of antisemitism.

He is called “a dog” and intimidated by youths as he walked around wearing a kippah on his head and a tzitzit (ritual tassels).

Klein was inspired by a YouTube video made by a New York woman who filmed the sexist remarks people made while she walked around the city for 10 hours. He went ahead with the experiment after four Jews were murdered in a an attack on a kosher grocery store in Paris last month.

Posting the video, he wrote: “Welcome to Paris 2015, where soldiers are walking every street that houses a Jewish institution, and where keffiyeh-wearing men and veiled women speak Arabic on every street corner.”

The 10 hours Klein spent walking the streets of Paris – through Jewish and Muslim neighborhoods and around the Eiffel Tower – were documented by a photographer with a GoPro camera hidden in a backpack.

Tourist attractions were relatively calm, he reported, but he added, “the further from them we walked, the more anxious I became over the hateful stares, the belligerent remarks, and the hostile body language.’

He said youths shouted, “Viva Palestine” and one said to him,”I’m joking, the dog will not eat you.”

One little boy apparently reacted to his appearance, saying: “What is he doing here Mommy? Doesn’t he know he will be killed?” 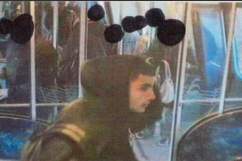 Loading more stories
wpDiscuz
0
0
Would love your thoughts, please comment.x
()
x
| Reply
A Jewish journalist is insulted, threatened and spat at as he walks around Paris for 10 hours in a skullcap being filmed by a hidden camera.