Even in the Oval Office it’s not easy to get the right angle for a selfie.

So President Obama tried out a selfie stick to make sure his close-up wasn’t too in-your-face.

The presidential posing was all part of a jokey video released on Thursday in an attempt by the White House to spread the word about the government’s overhaul of the nation’s health system to a younger, more technologically savvy audience.

‘How did we get Obama to use a selfie stick?’ said website BuzzFeed, which made the film. ‘Oh, because he wants you to go to https://www.healthcare.gov/.’

The footage is titled ‘Things everybody does but doesn’t talk about.’

We Got President Obama To Use A Selfie Stick In This Video About Things We All Do But Won’t Admit http://t.co/i1LHbcifz3

It starts with Mr Obama making faces in a mirror, even donning sunglasses and shaping his fingers like a gun.

Then he strikes a series of poses with the selfie stick, winking into the lens before running through his healthcare patter and having trouble pronouncing the word ‘February.’

His actions are mirrored in the film by a ‘regular guy’ who goes through similar moves in his home and out on the street.

The president is also shown at his desk drawing a sketch of wife, Michelle and trying to fit an oversized biscuit into a glass of milk.

He is pretending to throw a basketball through a non-existent hoop when the ‘regular guy’ – apparently a West Wing worker – walks in and catches him.

‘Can I live?’ says the president, who finishes the video saying, ‘YOLO, man.’

The film was made for BuzzFeed as part of Mr Obama’s outreach to the new vanguard of online media.

Last month, he was interviewed by some of YouTube’s most popular personalities, GloZell Green, known for her outrageous antics, Hank Green, a science and tech geek, and decorating and make-up video blogger Bethany Mota, with mixed results.

GloZell Green had an uncomfortable moment when she suggested the president had a ‘first wife,’ when she meant to say ‘First Lady’ and challenged him on race.

The Buzzfeed video was released the day after Mr Obama sat down at the White House for an interview with the site’s editor-in-chief Ben Smith. 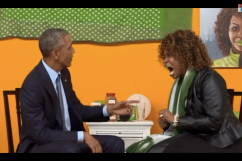