Actor Josh Brolin rescued a surfer overwhelmed by waves last month, and video of the event has emerged.

As TMZ reported, the event took place in Hawaii on February 27. The video shows Brolin, 47, towing the beleaguered surfer to safety.

Most recently, Brolin played Thanos in “Guardians of the Galaxy,” a role he is expected to reprise. He is also known for teking the lead role in Spike Lee’s reboot of “Oldboy” and the titular role in “Jonah Hex,” among many other films. 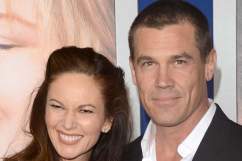