Dzhokar Tsarnaev has been found guilty by a federal jury in the Boston Marathon bombing case nearly two years to the day after the terror attack.

Dzhokhar Tsarnaev guilty of all counts

The bombing killed 3 and injured more than 260 on April 5, 2013. Tsarnaev’s brother, Tamerlan, was killed by police while the brothers were on the run in the days after the shooting.

Tsarnaev was found guilty on all 30 charges he faced. The jury deliberated for just under 12 hours after a 17 days of testimony. He was found guilty of killing Krystle Marie Campbell, Lingzi Lu and Martin Richard at the bombing and MIT Officer Sean Collier in the aftermath.

Tsarnaev and his brother placed pressure cooker bombers near the Boston Marathon finish line. They then ambushed and fatally shot Collier on the MIT campus three days after the shooting.

Jurors saw photos and videos of the victims and heard graphic testimony describing their injuries.

Seventeen of the charges Tsarnaev faced carry the death penalty. The date for the start of the death penalty phase hasn’t been set yet, the U.S. Attorney for Massachusett’s office said on Twitter.

Massachusetts does not have the death penalty, but the case was heard in the federal system, which does. The same jurors will return to court for the second phase of the trial. 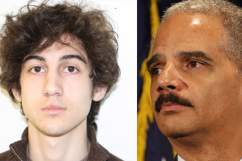 2. His Defense Team Admitted Tsarnaev Took Part in the Bombing

Tsarnaev’s attorneys made the admission and attempted to claim that Tsarnaev had been pressured into the bombing by his older brother and played less of a role in it. During her opening statement Judy Clarke argued that Tsarnaev was influenced his brother who “self-radicalized,” according to the Boston Globe.

Defense: Clark concedes "it was him" in the boat, and him with the backpack, referring to Dzhokhar. #Tsarnaev 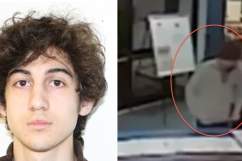 3. Tsarnaev Was Caught After a Shootout in a Boston Suburb

He was found hiding in a boat days after the shooting and taken into custody alive by police.

The indictment in the case claims that Tsarnaev left a written confession in the boat where he was captured in a Watertown back yard, saying, “I don’t like killing innocent people” but it was justified because of US government actions abroad. “The US Government is killing our innocent civilians. I can’t stand to see such evil go unpunished. We Muslims are one body, you hurt one you hurt us all,” the indictment alleges. “Stop killing our innocent people, we will stop.” 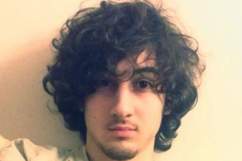 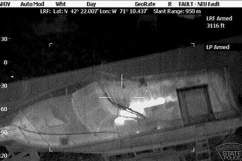 4. He Showed No Emotion While the Verdict Was Read

Ct One: @Tsarnaev GUILTY. That makes him death eligible. He still just looks down. His hands crossed. No emotion whatsoever.

Reporters inside the court room said Tsarnaev showed no emotion as he heard the verdict. Video is not allowed in federal courts.

Tsarnaev stood, his hands clasped in front of him and his head bowed, CNN said in its live coverage of the verdict announcement.

Clerk asks for the defense to remain standing. Have you reached a verdict? Yes says a juror #Tsarnaev

#Tsarnaev now seems to take a sideways look at jury. His arms are crossed in front of him.

5. Survivors & Family Members of Victims Were in Court

Carlos Arredondo (C) leaves federal court after the first day of the Dzhokhar Tsarnaev trial March 4, 2015 in Boston, Massachusetts. Arrendondo became a person of note after he was shown helping to rush a spectator whose legs had been blown off in the 2013 Boston Maration bombing to safety in a widely distributed photographed. (Getty)

According to CNN, there were survivors of the bombing and family members of the victims in court while the verdict was announced.

Bill and Denise Richard, the parents of 8-year-old victim Martin Richard, were among those in the courtroom.

As Denise Richard wiped at the tears beneath her glasses, Jahar left courtroom as he always does, looking straight ahead. #Tsarnaev