Google wants you to find your spirit animal for Earth Day 2015. The doodle for April 22 is a quiz, another new departure for the search engine’s art department.

1. Google brags that its quiz is “totally scientific and 1,000 per cent accurate personality quiz.” It will show what you animal most closely represents your character. The doodle has the usual spinning icons and colors, a click on it brings you to a quiz.

2. A bunch of celebs, including Ed Norton, have gotten involved in the quiz for Google with the company posting their results in a series of YouTube video.

Edward Norton – Google Doodle Earth DayWin a Google Hangout with Edward Norton and a Birdman poster signed by cast and crew Donate Now: crowdrise.com/EdwardNortonEarthDay Your donation today can get us an additional $20,000 matching grant from Google. Even better, anyone that donates at least $100 will be entered to win a 20 minute iChat with Edward Norton. Every penny counts…2015-04-22T18:26:18.000Z

3. In Google’s blog post on the doodle it reads “Once you’ve gotten to know your deepest self, we hope you’re also inspired to help make a real difference this Earth Day. For the month of April, we’re partnering with our friends at Google.org, who will match donations to the following animal-loving organisations up to $20,000. That means every $1 you donate to one of these great groups is worth $2 to protect wildlife around the world.”

4. If you’ve tried the Google quiz, then why not try a harder Guardian quiz on Earth Day. On Spirit Animals, Urban Dictionary says “In pagan religions and systems, a spirit animal or totem is meant to be a representation of the traits and skills that you are supposed to learn or have. Online, saying something or someone is your spirit animal is a statement that said person or thing is a representation of you or what you want to be.”

5. Earth Day was first proposed in 1969 by San Francisco peace activist John McConnell and put into action by U.S. Senator from Wisconsin Gaylord Nelson. The politician was later awarded the Presidential Medal of Freedom for his actions.

Obviously there were some of Gaylord Nelson’s colleagues who thought that the day was merely a commie plot because the proposed say is Vladimir Lenin’s birthday. The Daughters of the American Revolution said in 1970 through a statement that “subversive elements plan to make American children live in an enviroment that is good for them.” In Soviet Russia, April 22 was a holiday. The link to Lenin also intrigued then-FBI Director J. Edgar Hoover. Also obvious is that, in 2015, Fox News still thinks it’s a commie plot. 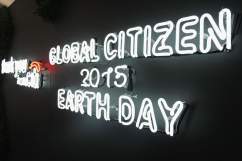