Google is celebrating the 98th birthday of British-born Mexican Surrealist painter, sculptor and writer Leonora Carrington with a Google Doodle on April 6.

Carrington lived most of her life in Mexico City until her death in 2011.

The Google Doodle features her painting and sculpture How Doth the Little Crocodile.

The art is based on a Lewis Carroll poem that appears in Alice’s Adventures in Wonderland:

How doth the little crocodile
Improve his shining tail,
And pour the waters of the Nile
On every golden scale!
How cheerfully he seems to grin,
How neatly spreads his claws,
And welcomes little fishes in
With gently smiling jaws!

1. She Was Born to a Wealthy Family in England

According to her New York Times’ obituary, Carrington was born April 6, 1917 in Lancashire, England. Her father was a wealthy textile manufacturer. She was sent by her Catholic parents to convent schools, but wsa expelled for her eccentric behavior. She was eventually sent to an art school in Florence and then to another art school in Britain led by modernist Amédée Ozenfant.

Carrington’s father didn’t want her to become an artist, insisting she be presented as a debutante. But her mother was “mildly encouraging,” according to the Times, and gave her a copy of Herbert Read’s book on Surrealism in 1936, which had a reproduction of a Max Ernst work on the cover.

2. She Fell in Love With Max Ernst & His Surrealist Work

Carrington met Ernst, whose work had inspired her, in 1937 as a 20-year-old and began living with him, according to the biography on her website. She participated in the “Exposition internationale du surrealisme, Galerie Beaux Arts,” in Paris in 1938.

Ernst was imprisoned in 1941 during World War II by the French as an “undesirable foreigner,” and later by the German Gestapo after the occupation of France, according to the Times, ending their love affair.

3. Her Art Often Featured Images of Women & Animals in a Fantastic Style

Picture of the sculpture “Stallion” on display at the Estacion Indianilla museum in Mexico City, on April 14, 2011 as part of the exhibition of Mexican sculptor Leonora Carrington. (Getty)

In an article about Carrington’s work, the Guardian’s Charlotte Higgins described her art:

…Wonderful paintings in which mingle the fantasies of Bosch, the elegance and spatial understanding of the quattrocento and her own personal mythology (drawing on Catholicism, Jewish mysticism and Celtic elements to create an utterly individual and at times impenetrable symbology). And yet, despite their fantastical elements, when you encounter them they seem natural and familiar: they might be the paintings of one’s own dreams. As Luis Buñuel once wrote of her work, it “liberates us from the miserable reality of our days”.

The New York Times in her obituary said she was interested in animal imagery, myth and occult symbolism.

Whitney Chadwick, an art professor at San Francisco State University and author of Women Artists and the Surrealist Movement told the Times:

She was a seeker and a searcher. In her work, she always sought to define moments when one plane of consciousness blends with another.

According to the National Museum of Women Artists, Carrington also “explored notions of femininity” in her work.

Picture of the sculpture “Paseo a caballo” (Horse Ride) on display at the Estacion Indianilla museum in Mexico. (Getty)

After Ernst was imprisoned, Carrington suffered from a mental breakdown upon escaping from Spain. While in an asylum she was given Cardiazol, a drug that caused convulsions similar to shock therapy. She wrote about her experiences there in a memoir called Down Below, describing it as if she was taken into an underworld.

She eventually went to the Mexican embassy and moved to Mexico City in 1941, where she lived for the rest of her life. She married Cziki Weiss, a photographer. They had two sons, Gabriel, who became a poet, and Pablo, a doctor who followed in his mother’s footsteps as a Surrealist artist.

5. She Was a Founding Member of the Women’s Liberation Movement in Mexico

According to the Independent, Carrington was responsible for co-founding the women’s liberation movement in Mexico, talking often about the “legendary powers” of women and the need for them to take back their rights. She often depicted her thoughts on women and feminism in her works. 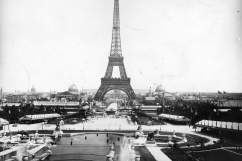 When Did the Eiffel Tower Open to the Public? 5 Fast Facts You Need to Know

Loading more stories
wpDiscuz
0
0
Would love your thoughts, please comment.x
()
x
| Reply
Leonora Carrington is being honored with a Google Doodle in celebration of her 98th birthday. A British-born Mexican Surrealist artist, Carrington died in 2011.